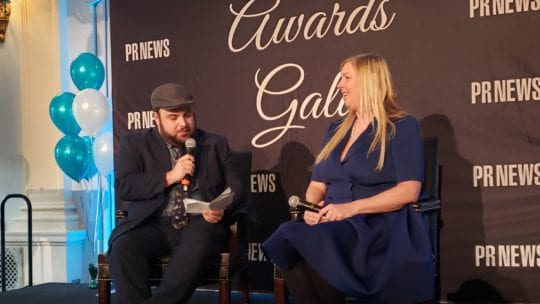 At first glance, Dr. Julie Albright might have seemed out of place at last week's PRNEWS Digital Awards breakfast in New York City. A digital sociologist, Albright has chronicled the sometimes stultifying results that come from society's excessive devotion to digital devices. For many, texting and other digital messaging are replacing talking, she's written. For proof, look to the iPhone. When it was released, 90 percent of the time it was used for calls. Apps occupied just 10 percent of users' time. That's reversed now.

Basic communication is evaporating in today's digital-first society, straining interpersonal development. A distressingly large segment of students turn to digital devices instead of friends, Albright writes. Often they ask teachers, "How do I make friends?" And students' response to "What did you do over the summer?" many times is, "I spent time in my room...with my phone."

The larger issue, Albright argues, is that students' digital obsession is not only weakening their connections with other people and stripping away sensory experiences. It also has lessened ties to places, jobs, and other structures once thought of as signposts of society. Traditional habits and norms, such as marriage, home buying, attending worship services and joining political parties, now are quaint reminders of a quieter time. The result is a large generation gap.

The sole constant, of course, is digital connectivity. Many younger people sleep with their phones beside them.

In the Lions' Den

Yet Albright found digital advocates surrounding her on all sides that morning. Their hope was to ascend the Yale Club stage and take home a PRNEWS Digital Award.

Despite what might have seemed inhospitable surroundings, Albright endeared herself to the crowd during the course of a fireside chat with PRNEWS senior content manager Justin Joffe.

Taking a page from the PR pro's playbook, she began with a story. It turns out she'd written much of her latest book, "Left To Their Own Devices," several floors below, in the Yale Club's wood-paneled library. As many attendees were NYC-based, she noted her book is "sort of a love letter to NY." It opens in a NYC subway car, with most people glued to their screens—connected but alone.

From there Albright solidified her ties to the digitally-connected crowd noting that she's hardly a technophobe. "I took pictures of my dinner last night," she admitted.

A lecturer at USC, her prescription is two-fold. First, she said, society must look at where its digital obsession is leading. "We jumped out so fast with digital devices...do we really want to be where we are?" she asked. Second, is to think about ways to reduce digital use. "Step back...try to balance things a bit more."

What is to be Done?

The takeaway for communicators is that PR and marketing can play a role in society's self-correction. Indeed, there's already evidence of pushback against excessive use of social media.

Communicators can create "moments where we put away devices," Albright said. These moments should capitalize on the human desire for "tactile, sensory experiences." Reminiscent of experiential marketing,  customers will "crave" such moments. They'll be "memorable," she added. "Think about what [non-digital]" things you want to bring back, she said.

Taken in this light, it didn't seem ironic that one of the PRNEWS Digital Awards went to New York Presbyterian Hospital's Grandma Cuddler. The effort was a short video that tells the story of Joan Hart, 82, who cuddles infants in the hospital's neonatal intensive care unit.

Speaking of babies, Albright had a final word for communicators. Some infants, she said, receive iPads. This is before they can speak. As a result, "they'll grow up thinking differently than we do." Messaging that will resonate with adults who began as iPad toddlers likely will need to be different.