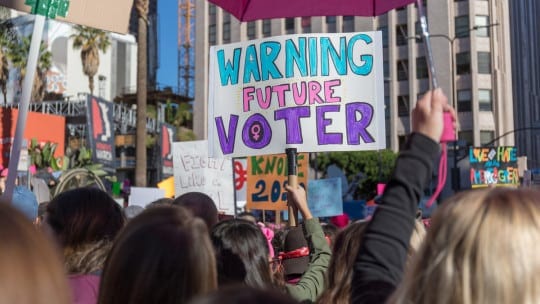 On the first anniversary of Trump’s inauguration, women (and men) took to the streets to protest the presidential administration and support fellow sisters at Women's Marches across the country—and posted to social en masse. Marches were organized in nearly every major U.S. city from New York to Dallas.

The Women's March shifted its messaging focus this year from protesting Trump's policies to increasing voter registration. At the Las Vegas march, the official Women’s March organization launched Power to the Polls, the starting point in a year-long effort toward increased turnout at the midterm elections.

“Women's March has created a powerful movement that has ignited thousands of activists and new leaders,” Tamika D. Mallory, co-president of Women’s March, said in a statement. “In 2018, we must turn our work into action ahead of the midterms. This new initiative will address voter registration and voter suppression head on."

It’s an understatement to say that women had a lot to march for this year, especially given the #MeToo movement's momentum in exposing cases of sexual misconduct in a wide array of industries.

Nonprofits from across the country came out to support the Women’s Marches. Here are a few of their most-engaged posts over the course of the March:

The ACLU of Nevada showcased the magnitude of the crowd with an image of the stadium at the Power to the Polls launch event, shared on Twitter.

1199 SEIU used a longer caption on Facebook to explain exactly why they were joining the march in Morristown, NJ.

The New York Civil Liberties Union used Instagram's multi-photo feature to show the diversity of support at the march in New York City.

The Eva Longoria Foundation leveraged influencer power, sharing images of some of the celebrities who came out to speak and support the cause. Actresses and activists Eva Longoria, Natalie Portman and Constance Wu spoke to protesters in Los Angeles.

"This march and this movement is far more ambitious in scope and scale and it extends beyond one political actor or even one political party. What we're calling for is sustainable and systematic change to the experience of women and girls in America.” - @evalongoria with @nportmanofficial and @wonstancecoo at the @womensmarchlosangeles this past Saturday. ????????????????: Jae C. Hong, AP

A post shared by The Eva Longoria Foundation (@evalongoriafoundation) on Jan 22, 2018 at 11:19am PST