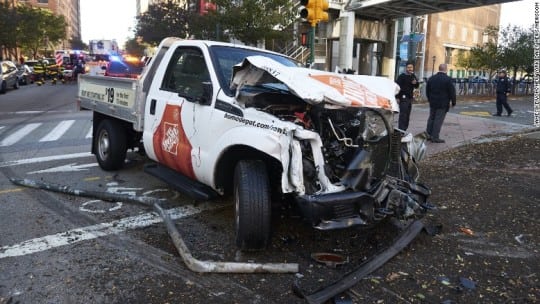 As so often happens when a violent tragedy strikes and claims human lives, brands were taken along for the sad and sobering ride this week. On Oct. 31, a man driving a pickup truck rented from The Home Depot drove down a busy bicycle path in lower Manhattan, killing eight and injuring many more. The perpetrator was an Uber driver who had been through its "rigorous" screening process with no apparent trouble despite multiple past traffic citations. Then on Nov. 1 a deadly shooting at a Thornton, Colorado, Walmart claimed three lives.

As the usual questions about gun control and immigration arise for America, questions arise as well for Walmart, The Home Depot and Uber about what and how they should communicate to their stakeholders to reassure and to help. To briefly sum up the situation for each brand:

An Uber spokesperson told news outlets "We are horrified by this senseless act of violence. Our hearts are with the victims and their families. We have reached out to law enforcement to provide our full assistance." The ride-hailing company has had a bumpy year; here's a timeline if you've lost track.

The image of The Home Depot's logo on the crumpled hood of a truck that had been used as a terrorist murder weapon is bad optics to say the least. The only requirements to rent a truck are a valid U.S. or Canadian driver's license and to be 21 years old.

This is far from the first shooting incident at a Walmart. There is even a blog that keeps track of them all. Its statement: "The entire Walmart family is deeply saddened by this tragic event. Our thoughts, prayers and condolences go out to the families who lost loved ones and to all who were impacted by what took place. We are assisting law enforcement however we can and are referring all requests for information to them." It also said no store employees were injured.

Andy Gilman, founder and CEO of CommCore Consulting Group, says that first and foremost brand communicators need to determine how to respond to specific stakeholder groups by monitoring news and social media. That's not all that has to be monitored: "If your stock dips, you need to make sure you're talking to investors; they're human beings as well," he says.

For Richard S. Levick, founder and CEO of LEVICK, the rule in these situations is: Victims first and always. "When companies, despite their lawyers' objections, reach out to victims, they end up having reduced exposure," he says. After that, it's about promoting best practices going forward. "How can we be even more secure, more safe? What procedures do we make changes to going forward?"

As with hacking and data breaches, "the public has become aware that these things happen. I do think the outrage and blame is less because of that awareness," Gilman says. However, if you have a strong brand reputation like The Home Depot does, people tend to give you the benefit of doubt. Uber, however, which has seen more than its share of PR crises, could be in more reputation jeopardy. "Nobody's suggesting [the suspect] was driving for Uber when this happened, but the mere association could be brand-damaging," he says, in ways as simple as a customer opening the Lyft app instead. Having a more crisis-resistant reputation is "not a passive thing; you need to have created that in advance," Gilman says.

Levick points out what he sees as an oddity among the brands' choices: Ken Langone, co-founder of The Home Depot, appeared on Fox News Nov. 1 to speak about his concerns with immigration. "That is not something we would have recommended to our clients," Levick says. Uber didn't make itself the center of the story, but "Langone, by looking for someone to blame, puts Home Depot more in the news without offering anything to make it better. It seems like a very strange thing to do."