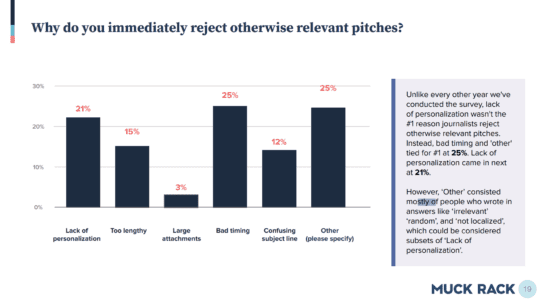 2020 was one of the most challenging years for those in communication—journalists and PR pros especially. Aside from trying to navigate their own understanding of COVID-19, social justice issues and the presidential election, media was tasked with delivering breaking information to a harried public.

Seeking to make sense of a chaotic year, Muck Rack, the PR management (PRM) platform, released its fifth annual State of Journalism study. The survey of 2,500 writers sheds light on how they choose stories to write, use social media and work with communicators. Muck Rack fielded the survey from Jan. 11 through Feb. 8, 2021.

Despite 2020's many changes, the study emphasizes that journalists continue to appreciate brief, relevant pitches. This is especially so since many reporters face increased workloads due to the pandemic's economic downturn and shrinking newsrooms.

Understanding journalists' pace is one way PR pros can approach relationships with media members. The average journalist tends to work three or more beats and writes five or fewer stories per week, according to the study. Just 25 percent of those stories result from pitches. You could say journalists are not only spending a lot of time writing, but as much time digging and acquiring necessary information.

Another reason brevity is favored: 23 percent of journalists say they have a larger workload due to layoffs and furloughs. Not surprise that a whopping 91 percent of writers prefer pitches of fewer than 200 words. They also appreciate a minimum of follow-ups in their inbox. Nearly the same amount (90 percent), though, say it’s OK to send at least one follow-up email.

Most journalists believe companies need to update how they share information with media members. A total of 61 percent said corporate information sharing is outdated. It certainly appears there are opportunities for PR pros and vendors to update information-sharing methods.

And even though journalists want innovative outreach, 94 percent said email remains the number one way to contact with them. Phoning is the least popular, with just 10 percent preferring it.  So, even though you might want a friendly chat, save the small talk for a quick ping over Outlook.

The eternal question for media relations pros remains: 'Why is a pitch accepted or rejected?'  Offering an exclusive could be the answer. An overwhelming majority (80 percent) say they are somewhat more likely to cover a story if offered one.

Feeling rejected? For 25 percent of journalists, it’s just bad timing. On the other hand, spray-and-pray pitching, particularly with incorrect information, remains a no-go. MuckRack found 21 percent of journalists trash pitches due to a lack of personalization. So, make sure names are correct when addressing!

Media Relations, Not a Partnership

And as always, one of the best ways to get noticed is to develop a genuine, tactical relationship with journalists. However, understand that the overwhelming majority of reporters won't view it as a partnership. Essentially, PR pros provide a service to journalists. It's up to the journalist how to use pitched information. Just because information is shared does not mean journalists will use it; however, if it fits their beat or story pursuit, fine.

So, if you really want to score points, look at what journalists need. The vast majority (86 percent) find academic subject-matter experts and CEOs (74 percent) the most credible sources. Making them available will help most stories.

Social media continues to influence reporters: 76 percent of journalists find Twitter their most valuable social platform; 45 percent consult a company’s social media when reporting about it.

“From the pandemic to widespread layoffs to concerns about press freedom, 2020 was a challenging year for journalists and the industry as a whole. But it also reinforced the vital role journalists play in our society, especially in times of crisis,” Muck Rack co-founder and CEO Greg Galant said. “Our study shows a remarkable level of resilience among journalists, and it also reveals opportunities for PR pros to become more effective supporters of journalists.”