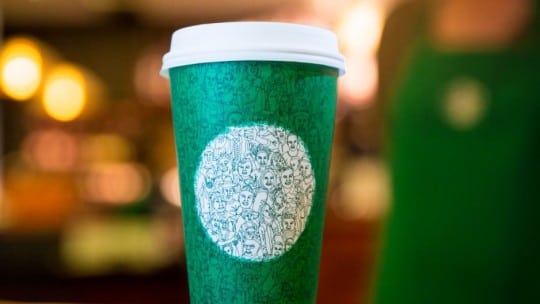 Starbucks released a new cup design to celebrate community Nov. 1, and in a very much precedented turn of events, people are upset about it. Let's break it down:

The Idea: A green cup featuring a drawing by artist Shogo Ota, using only one continuous line, that illustrates a diverse crowd of people—"a symbol of unity as a reminder of our shared values, and the need to be good to each other" in this divided election season, as CEO Howard Schultz puts it.

The Response: Varied and confusing. First, there's a misperception that this is the 2016 design for Starbucks' annual holiday cup (it's not). The design of holiday cups in past years has been criticized for not displaying explicitly Christmas-related iconography (see also The War on Christmas) and thus being too "politically correct," this angle having reached a climax in 2015 when the cups were simply red with a green Starbucks logo, nary a snowflake or ornament to be found. So predictably, the mistaken notion that this year's holiday cup is even less Christmasy has ruffled some feathers, with right-wing outlet Breitbart doing some of the ruffling.

But even when focusing solely on the intended message, some in the Twittersphere have found reason to take umbrage, calling it "political brainwashing" and "liberal bias," an impression that may be colored by Howard Schultz's endorsement of Hillary Clinton Sept. 7. Add the fact that Donald Trump has halfheartedly suggested a Starbucks boycott in the past, and there are clearly some battle lines drawn that predispose some to attack the brand with little provocation.

So lessons for brands might be: 1) Don't wade into anything touching politics, even with seemingly neutral intentions, 2) When you've established a tradition, be ready for blowback when you change it, 3) Be very clear in communications when there's a possibility that customers might interpret your actions as a change to tradition.

Or perhaps…do those things? A tempest in a teapot (or coffee pot) is still a tempest, and Starbucks never fails to get the public talking about the brand when these issues crop up. It's likely that the coverage of the outrage far outpaces any actual outrage, making it a net positive for the coffee giant.