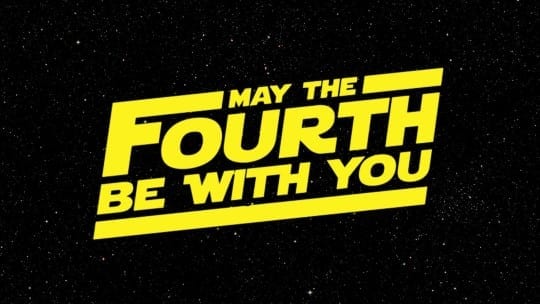 Star Wars is nearly unparalleled as a brand so popular that other brands (whether or not they have a cross-promotional deal) draft in its wake by paying tribute. That all comes to a head on May 4 (as in "May the Fourth be with you"), a fan-created holiday that has picked up steam and become all but official.

Thus, it's a good day for us to observe how brands are riding the wave, and to see the fruits of some professional content calendars: Clearly, for some of the articles, graphics, videos and campaigns out there, a bit of pre-planning was necessary. May the 4th was highlighted on planners, the question "how do we make a connection to this occasion?" was asked, and here are four of the results:

1. Sarge's Deli, an old-school New York Jewish-style restaurant serving up pastrami and matzo ball soup, sent out this email, a fine example of how even a small local business can get in on the fun: 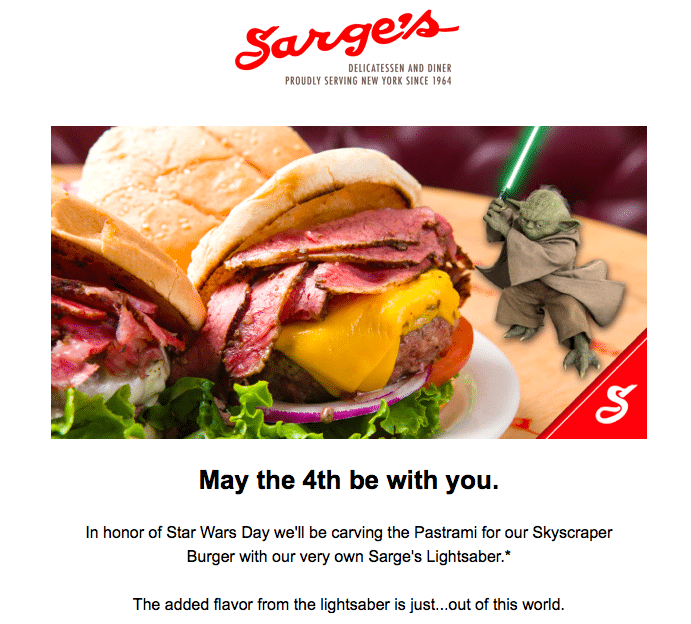 (n.b. the email did include a disclaimer that there was no real lightsaber involved in food prep, disappointingly.)

2. Merriam-Webster, as tuned-in social media experts know, has proven to be incredibly adept at becoming a relevant part of conversations from hot-button political issues to lighter trends. The famed dictionary tweeted an insightful article about nomenclature in the films:

It's #StarWarsDay! The franchise owes some of its success to its surprisingly plain language. #MayTheFourthBeWithYou https://t.co/IIreqwQaiZ

3. Sesame Street provided us a fine example in its solution to the game of "find the connection." The character Grover, like Yoda, was first voiced by Frank Oz, and many fans have observed that they sound alike...

When 900 years old, you reach… look as cute, you will not, hmm? #StarWarsDay pic.twitter.com/hGhZoJFBdQ

4. Scientific American seized on the "sci" part of "sci-fi" to tap into the mood by asking a question fans have all wondered: Could any of it be real, and if so, how could we know?

Blog: Could we even tell if the universe around us was filled with galactic empires and rebel forces? #StarWarsDay https://t.co/DwqcFwUOz0

A caveat for PR folks: May the 4th has already grown so big that some are fatigued by trend-hopping, so as always, remember to do your homework before inserting your brand into the conversation:

If you are a PR person and you are emailing me about Star Wars Day, make sure you spell "wookiee" correctly or we're done before we started.