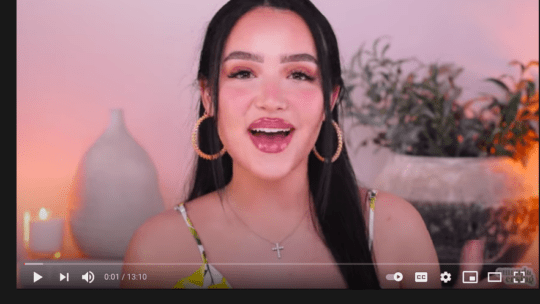 On Jan. 6 at 2:55 p.m. ET—about 20 minutes after insurrectionists breached the U.S. Capitol building—beauty influencer Amanda Ensing tweeted, “There’s not enough popcorn in the world for what’s about to happen.” A self-proclaimed Trump supporter and Christian, Ensing has long been vocal about her political and religious views on social media.

There’s not enough popcorn in the world for what’s about to happen.

Users on both the left and the right were quick to condemn Ensing’s Jan. 6 comment, with fellow influencer Gabriel Zamora tweeting, “this is entertainment to you?” and others questioning Ensing’s religious convictions. In addition, social media users have denounced Ensing for “blackfishing,” or pretending to be black or mixed-race online for personal gain. (No evidence has refuted Ensing's half-Puerto Rican heritage, although critics have alleged a misleading opportunistic and "rebrand").

Ongoing backlash triggered Sephora—which contracted with Ensing on skincare content—to part ways with the influencer. On Jan. 29, Ensing posted a YouTube video sponsored by Sephora to her account. In a pinned comment, Ensing claims Sephora asked her to remove the video “hours after it was approved to be posted.” Sephora responded to individual complaints about the brand’s choice to partner with Ensing with a version of the following:

“Thank you for reaching out and bringing this to our attention. We were made aware that Amanda Ensing, an influencer contracted through one of our external vendors’ campaigns, recently shared content on social media that is not aligned with Sephora’s values around inclusivity. As soon as we were informed, we made the decision to cease all programming with Amanda and will not be engaging her for future partnerships.”

"We were recently made aware of concerning behavior by Ms. Ensing on her social platforms. Most recently, she made light of the violence and tragic loss of life at our nation’s Capitol last month. For this reason, we made the decision to cease all programming with her indefinitely, including having the video she created through an external vendor, taken down. Any claim that this decision was made on the basis of political or religious beliefs is inaccurate, we respect each individual’s right to have their own perspectives and freedom of expression. However, Sephora reserves the right to terminate any partnership we deem inappropriate for our brand.

Ms. Ensing has also suggested that Sephora has attempted to silence her, which is not accurate.  Sephora has not had any direct contact with Amanda or her legal team.  Her contract, including but not limited to terms of payment and disclosure protocols are all handled by RewardStyle, a partner of Sephora. We take this seriously and are working to ensure all future influencer outreach, content and partnerships are subjected to tighter controls.

At Sephora, we have made a commitment to build a beauty community that is welcoming, considerate, respectful and inclusive for all. These values will continue to guide every decision we make."

RewardStyle, a 10-year old influencer platform, which according to its website was founded “by influencers, for influencers,” boasts “a global community of more than 250 team members, 100,000+ top-tier influencers,” and “1 million brand partners across more than 100 countries.” The vendor’s services for brands include using a near-decade of “proprietary data to cast the right influencers with the right following for your brand.”

With such a large pool of influencers and clients, it is hard to imagine that even the most sophisticated analytics could note red flags for every influencer, let alone keep up with rapidly shifting public opinion as related to recent global and national crises. Mastering the communications discipline has long called for a personal touch and a level of risk assessment that experienced PR strategists are known for.

Sephora’s choice to partner with a conservative influencer was not necessarily misguided. In fact, seeking diversity of political beliefs when working with influencers—as opposed to selecting an influencer based on race, ethnicity, sexual preference or other identifiers—is a somewhat novel approach in 2021, albeit a calculated risk with tradeoffs. The hashtag #BoycottSephora trended briefly on Twitter following posts by Ensing alleging liberal bias and cancel culture. But contrast Sephora’s choice of Ensing with influencer campaigns that receive clapback for tokenization or “wokewashing” (projecting a progressive and inclusive brand identity without taking action), and the end result is about the same.

It is possible Sephora will see a drop in sales from social media-savvy conservatives claiming to shop elsewhere, at least in the short term. But if the outcry had continued—especially given newer claims about Ensing’s ethnicity—the fallout might have been worse. Ultimately, Sephora gets PR points for: 1) responding to complainants in direct messages or via email, rather than opening up further debate in the comments section, 2) justifying the choice via brand mission (“not aligned with Sephora’s values”) 3) offering concrete steps the brand is taking to amend the situation (“cease all programming...will not be engaging her for future partnerships”) 4) resisting the urge to sugarcoat Ensing's behavior ("she made light of the violence and tragic loss of life at our nation’s Capitol last month") and 5) correcting misinformation  ("Sephora has not had any direct contact with Amanda or her legal team").

This does not mean brands should stop monitoring influencers' feed after the ink has dried, of course—Sephora does resolve to enact "tighter controls" around future contracts. And while it is hard to imagine we've reached this point as a nation and as professional communicators, perhaps all influencer contracts going forward should include a clause prohibiting incitement to insurrection.

Sophie is a writer and events producer at PRNEWS. Follow her @SophieMaerowitz.