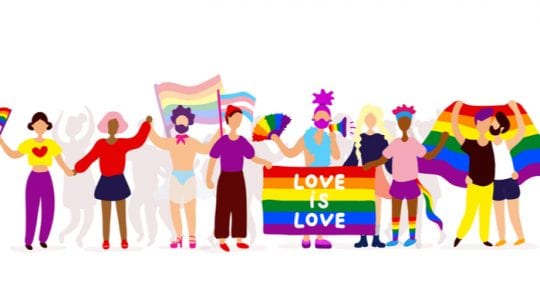 In 2018, Three Insights for Brands Contemplating Pride Activations implored companies to go beyond rainbows and glitter to engage with the story of Stonewall and lived experiences of the queer community.

Fast forward to 2021, and Lil Nas X is sliding down a pole to pleasure Satan himself, while brands continue to push generic rainbow merch. Something ain’t right.

This disconnect fostered a Rainbow Ad Anxiety, according to GLAAD’s new initiative with Procter & Gamble. In a survey of 200 advertisers, 81 percent agree “an inauthentic execution of LGBTQ people and scenarios would lead to a larger backlash than not featuring them in ads at all.”

In one of many TikTok videos of said "backlash," a computer voice says, “Y’all I'm at Walgreens and their Pride merch is an actual hate crime” over the popular sound of Castaways. As we write, this video has more than one million views.

Youths and their brand of front-facing, self-deprecating comedy, practiced by all ages, simply aren’t tolerating it. So, should companies give up on Pride? No.

Engage Real-Life Queer Folk Where They Live and Work

Start with your employees and begin the conversation way before June 1.

Don’t have queer employees? Start there. The pandemic and racial reckoning shifted attitudes across the US. Millions of Americans came together to support restaurant workers, DJs, and others in their community out of work. The idea of making a material impact on the lives of others in your community has never been more in vogue. Companies don’t need to partner with huge national brands or well-known organizations to make a difference.

There is no conversation without controversy. If you’re trying to design a Pride campaign so that it offends no one you’re doing it wrong. Don’t be scared to do something that is a stretch for your company's voice and identity. In fact, challenge yourself to think bigger and bolder as anti-trans bills are signed into law across the country.

Not everyone is going to like what you do, including some within the LGBTQIA community. So, lean into the controversy, take a stand and don’t be afraid to stand out amongst the crowd—that's the essence of Pride.

Aptly, Tiffany & Co.'s 2021 pride campaign, Stand For Love,  chronicles the first luxury jeweler to feature same-sex couples. In addition, it mentions Tiffany's previously announced partnership with the Ali Forney Center, an organization providing services for houseless LGBTQIA youth in New York City. It is clear Pride is more than a once-a-year issue for Tiffany and that the company is willing to take a stand “for love.”

Just as there isn’t a monolithic queer identity, there isn’t a single right way to celebrate Pride. As such, there is a plethora of opportunities for brands.

Is your brand less firebrand and glam? Great! Use that in your Pride campaign. There are plenty of people who have never donned a rainbow and glitter beard, attended a Pride parade or yelled at their senator–they’re still gay.

As this TikTok states, “Skittles is a gay candy, it is already Pride themed.” So, Skittles decided to “give the rainbow” by passing the microphone to a diverse set of queer creators across the country. The brand launched QueeR Codes and donated $100,000 to GLAAD from the sale of Pride-themed candy. Seeing as Skittles has spent years marketing the rainbow, you hope it finds a way to embrace its identity as a 'gay candy' year round.

Three years ago it was clear that brands needed to go beyond white gay men and rainbows and take action to support more marginalized groups within the queer community. Today, as a wave of anti-trans bills become law, we leave you with this tweet from writer, activist and media strategist Raquel Willis:

I’m dreaming of the first #PrideMonth where we’ve had zero deaths related to anti-trans violence in a given year. We’re not there yet.

Willis is right. We’re not there yet. Don’t give up now.

Michael Galfetti is a senior associate at Mission North