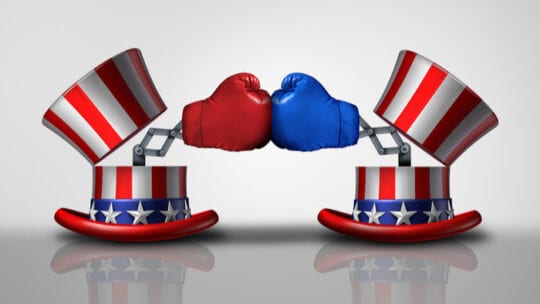 The first Presidential Debate of 2020 appeared to be neither presidential nor a debate.

In a contentious and interruptive shouting match that resembled an argument between angry old uncles at Thanksgiving dinner, President Donald Trump and former Vice President Joe Biden largely ignored the debate process and offered little that would appeal to the estimated 100 million viewers who might have tuned in seeking guidance on how to vote Nov. 3.

The spectacle was short on substance and facts, and long on insults and name-calling. No doubt it solidified the positions of each candidate’s supporters and left independent voters as confused as ever.

Lack of New Ideas and Details

The president's lack of preparation was telling. He had nothing new to say, presented no fresh ideas and often merely repeated statements, opinions and accusations he’s offered many times before. He missed an opportunity to surprise and impress voters.

Biden failed to offer enough detail about his proposals. Had he done so, he could have distinguished himself from the president and inspired some of those who have yet to choose a candidate. As one undecided voter told pollster Frank Luntz in an online post-debate focus group: “Don’t just tell me you have a plan, tell me what your plan is.”

Trump shouted and gestured too aggressively at several points. Every time he did, he looked less than presidential and allowed his challenger to seem more dignified and cooler under pressure.

Biden too often took the president’s bait, resorting to interruptions and name calling rather than staying on message. At one point, he called the president “a clown.” At another, he blurted: “Will you shut up, man?” Those mistakes undermined what could have been a winning performance.

Both men rudely interrupted each other far too often, violating agreed-upon debate rules and exasperating moderator Chris Wallace, who often had to forcefully remind Trump and Biden to allow each other to finish their statements within allotted time. “Please let the vice president finish,” Wallace admonished Trump during one segment focused on the economy. “I guess I’m debating you, not him,” a petulant Trump shot back at Wallace. It looked very un-presidential.

Each candidate hurled unsubstantiated statements and accusations about the other, serving only to befuddle the audience. “China ate your lunch,” Trump sneered at Biden during an exchange about foreign trade. Later, Biden barked at Trump: “You're the worst president this country has ever had.”

As he has done at news conferences and political rallies, Trump speculated about a Biden presidency—an ill-advised debate tactic. “If you got in … if you ever became president with your ideas—you want to terminate my taxes (tax cuts), I’ll tell you what. You’ll lose half of the companies that have poured in here,” Trump said. “They’ll leave.”

Biden appeared strongest when he angrily defended his sons Hunter and Beau against Trump’s direct and implied criticism of them toward the end of the 90-minute debate. “My son was in Iraq,” Biden said of his late son Beau while pointing a finger at Trump. “He spent a year there. He got the Bronze Star. He got the Conspicuous Service Medal. He was not a loser. He was a patriot, and the people left behind there were heroes.”

Trump appeared strongest when defending his administration’s decision to push forward with Senate approval of Supreme Court nominee Amy Coney Barrett just weeks before a national election that could change the country’s leadership. “We won the election. Elections have consequences,” Trump said. “We have the Senate. We have the White House and we have a phenomenal nominee, respected by all.”

Experienced speakers know the key to a memorable or persuasive presentation is to share something new that makes the audience think or act differently. Neither candidate achieved that objective.

Trump and Biden fought to a draw in the first presidential debate of 2020, defeating dignity and respect in the process.

Gene Grabowski is a partner at kglobal and former member of the media. Follow him:@crisisguru