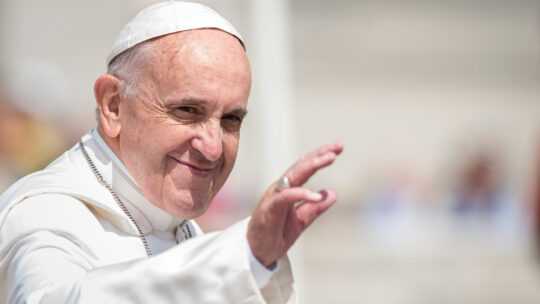 In a rare move from the Vatican, Pope Francis thanked journalists on Saturday (Nov. 13) for years of unflinching investigation into sexual abuse within the Catholic Church.

Blessing a free and fair press

Members of the media seemed to appreciate the accolade, which was shared at a ceremony honoring two longtime Vatican correspondents: Philip Pullella of Reuters and Valentina Alazraki of Mexico's Noticieros Televisa. Reuters coverage centered on the pope’s acknowledgement of the Church’s misdeeds. “(I) thank you for what you tell us about what is wrong in the Church, for helping us not to sweep it under the carpet, and for the voice you have given to the abuse victims." The pope also hinted at the "fake news" debate, citing the dangers of online misinformation.

Other mainstream outlets, including Axios, New York Daily News, and The Washington Times, picked up the story in addition to religious and Vatican focused publications like Rome Reports and the National Catholic Reporter.

Crisis communications expert and public information officer at Orange County Corrections in Orlando, Fla., Tracy Zampaglione says “Pope Francis is to be applauded for commending journalists for their tenacity in covering the rampant sexual abuse within the Catholic Church,” noting that the pope’s stance “is consistent with the Society of Professional Journalists Code of Ethics which says journalists should seek truth and report it.” The code also states that journalists should be honest and courageous in gathering, reporting and interpreting information, Zampaglione adds.

The pope gave a nod not only to journalists, but perhaps to communications professionals as well, stating “we are in great need of journalists and communicators who are passionate about reality, who are able to find the treasures that are often hidden in the folds of our society.”

One doesn’t often see senior leaders voluntarily calling attention to old wounds until they’re old news. Yet, while it’s been a long time since the 2002 bombshell report from The Boston Globe, investigations into the Church’s sexual abuse of minors have continued, with an October 2021 report from the Independent Commission on Sexual Abuse in the Church in Paris, which found that 330,000 children were sexually abused by clergy or lay members of France’s Catholic Church since 1950, with 216,000 of victims abused by clergy, among other reports.

The perception of the Church’s scandals as old news is exactly the problem, says Gene Grabowski, partner at kglobal. “Thus far, most in the news media have politely accepted his statement thanking journalists for their persistent news coverage of sex and abuse scandals inside the Catholic Church,” Grabowski observes. “But many in journalism and among those who have been harmed by those scandals remain skeptical because of the pope’s past statements referring to the sensationalism of the news media and calling their focus on ‘old’ scandals ‘a grave sin.’ It also strains credulity that the Vatican would actually be thankful that the media uncovered such painful, serious and costly crimes.”

The pope's past, as compared to past popes

Credibility is the key word here. “To be credible, public statements such as this one must feel authentic to those hearing them and must be consistent with the person’s perceived character and previous utterances,” Grabowski argues. Pope Francis has indeed departed from hardline stances of his predecessors—for instance, a “more conciliatory tone” toward the LGBTQ+ community, per the Human Rights Campaign’s timeline 2013 to 2015.

Not a blue Monday for Vatican PR

Kudos to the Vatican’s press team: It’s been a pretty good start to the week for the pope so far, especially considering last month’s report out of France is still fresh. On top of other publications' coverage of the journalist thank-yous, The New York Times today (Nov. 15) ran a guest essay by Michael O’Loughlin, a correspondent for a Catholic news organization and author of “Hidden Mercy: AIDS, Catholics, and the Untold Stories of Compassion in the Face of the Fear.”

In the essay, O’Loughlin, who is gay, shared his reaction to an August 2021 letter from Pope Francis to O’Loughlin that praised the author in addition to the ‘many priests, religious sisters and lay people, who opted to accompany, support and help their brothers and sisters who were sick from HIV and AIDS at great risk to their profession and reputation’ during the AIDS epidemic.’

It remains to be seen whether the pope’s praise of investigative journalism was a passing acknowledgement of the elephant in the room, or an indication of a more transparent and progressive bent for the Church moving forward. We’ll soon see whether this week’s coverage is an example of smart long-term reputation management and a showing of goodwill from the Vatican, or more of a buffer from any scandals on the horizon.