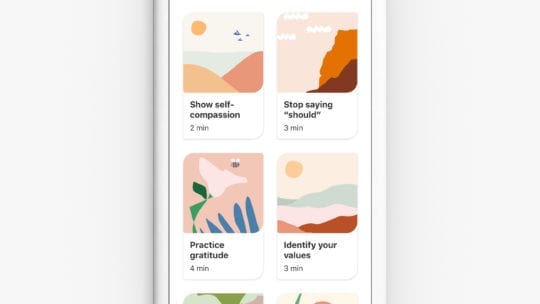 Digital platforms are constantly rolling out new products and services to improve the user experience, but seldom do those new features consider the user's experience off the platform.

That's where Pinterest, a social platform that organizes images on a digital corkboard, has broken new ground. Yesterday, its product team announced "an entirely new experience centered around emotional wellbeing," reports Wired. "When you type in an anxiety-related query—something like 'work anxiety,' or 'dealing with stress'—Pinterest will now display a box above the stream of pins."

"If you're feeling sad or stressed, here are some resources that may help improve your mood," reads the box, which Pinterest has dubbed "compassionate search." Pinterest stresses that the exercises it recommends, developed in collaboration with Brainstorm, a mental health innovation lab at Stanford's School of Medicine, and two other mental health organizations, are not a substitute for professional help. The company also emphasizes that these exercises are private and do not alter your pin recommendation algorithm.

Customer wellbeing is about far more than mitigating risk

Wired describes this "compassionate search" as "an attempt to offer its users a dose of comfort without veering too far from the core product." Speaking with Pinterest product manager Annie Ta, who led the project, the piece also notes that the decision to include this feature was based on something they already saw users searching for, coupled with the realization that they had an opportunity to improve both product experience and wellbeing by offering these resources.

Ta also explained that Pinterest used to approach these issues purely with the intention of mitigating risk, but now approaches things more holistically. “For a number of years, we’ve worked with emotional health experts to address pinners in distress,” she told Wired. They report that search terms related to suicide direct users toward resources like  the National Suicide Prevention Lifeline, while search terms like “self harm,” “cutting,” “bulimia” and “thinspiration,” don't display results, instead encouraging users to seek help.

Yet not all stress or anxiety-related search terms are as dire, and that's where "compassionate search" comes in. This new feature satisfies a user need in line with Pinterest's reputation for being a force of good online. In doing so, it also helps provide relief to searchers for whom a budding stress or problem might not be a full-blown 'risk' just yet.

This should remind communicators that facilitating customer wellbeing is about far more than mitigating risk— it's about creating a user experience that is in line with your brand values, identity and mission.

What could such compassion look like on other big platforms?

It's easy to draw a great contrast between Pinterest's "compassionate search" and Facebook, which has for years prioritized the needs of its branded advertising partners over its end users. This has created a ton of risk for Facebook, including accusations of election tampering, massive privacy leaks and subsequent fines. But the greatest repetitional hit in Facebook's behavior seems to be that its slew of new products, features and corrective measures have done very little to repair the gulf between what the brand claims its values to be and what it demonstrates them to be.

Instagram, the popular photo-sharing app owned by Facebook, has a feature that shows users how much time they spend on the platform each day, but the feature is buried within settings. What would the platform be saying to users if that feature were a daily report, prominently displayed, to let the user know that the platform was invested in their healthy social media habits?

By the same token, what if Facebook's recent features allowing users to download their personal data off the platform was easily accessible—not hidden in the settings tab, but right there on your main landing page after logging in? Or what if Facebook instituted some gradient to let people know when they were reading biased political content?

While it's not hard to imagine what compassionate features on the other platforms could look like, it's less realistic to believe that other platforms than Pinterest would actually make an effort to implement them without tying such features directly to a bottom line. Nonetheless, Pinterest reminds us that building a compassionate user experience for your customers is the best way to strengthen your brand's community engagement, and show them that your intentions extend far beyond the need for greater profits.