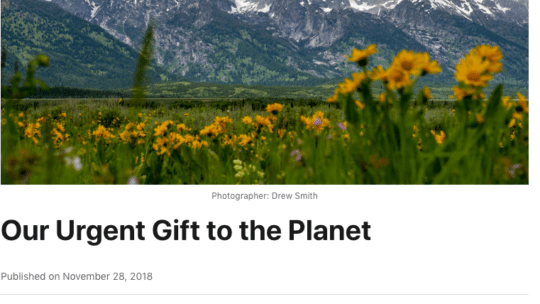 Here are some lessons learned from Patagonia's initiative.

Timing is everything. Framed as "Our Urgent Gift to the Planet," Patagonia's announcement comes just in time for the holiday season. It stands out in stark contrast to other companies' Black Friday and Cyber Monday pushes for end-of-year revenue, and General Motors' announcement of major layoffs right before the holiday season. It also comes right after the release of the 2018 Climate Assessment report, which projects dire outcomes for the economy and public health if urgent steps are not taken to address our environmental crisis. The report is still fresh on the minds of those concerned about the environment, despite the Trump administration's strategic timing of the report—which stands in opposition to the administration's stance on environmental deregulation. It was released right before Thanksgiving.

Taking a stand on a relevant brand issue. By now, most of the communications profession is aware that audiences in 2018 gravitate toward companies with strong social values. Patagonia, which has offered large annual donations to environmental causes, as well as free repair and zero-waste initiatives, has a long history of environmental stewardship. Therefore, it makes sense that it used its tax return to rally its audience around an issue at the core of the brand's mission. With environment as the central spoke around which the initiative turns, Mercario was free to criticize the administration's tax program, asserting that affording corporations massive tax benefits is "threatening these [public] services at the expense of our planet."

Leveraging LinkedIn for thought leadership. Just as reporters flock to Twitter for of-the-moment breaking news ideas, CEOs and top executives are now more active than ever on LinkedIn, using the platform to share and exchange industry news. Mercario's post has earned, as of this moment, over 3,000 likes and over 300 comments. These accolades come from the professional world, rather than a general online audience, and there's no doubt that Patagonia's competitors and contemporaries will have seen it by now. By posting a personal missive, Mercario has issued a challenge to other executives: Here's what we're doing with our extra cash. What will you do with yours? Time will tell if Patagonia's action sparks a movement, but given the literal and figurative environment, other brands would be remiss not to consider a similar move in the near future.