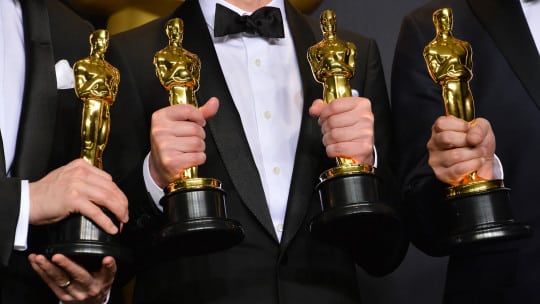 For all the pointed political talk of the bubbles that surround "Hollywood elites," last night's 90th annual Academy Awards showed a creative community that's reaching out to the world. Working to reckon with the culture of silence and toxic masculinity that eventually birthed movements like #MeToo and #TimesUp, major players in the film and TV industries reminded viewers that their status as influencers reverberates well beyond the accolades of prestigious institutions.

Oscars host Jimmy Kimmel made sure that such matters were at the forefront of the evening during his opening monologue, in which he stated what  a great honor it was to be there with "so many talented women and men." A small inversion from the old standard ordering of "men and women" in public speaking, Kimmel's syntax was nonetheless significant for showing how ingrained in our subconscious the old ideas of representation actually are.

As the evening unfolded, Kimmel and other celebrity influencers continued to speak out as conscious, mindful advocates instead of talking heads. Here are some of the most significant moments.

At odds with the substantial amount of calls for action against predatory behavior in the business was the inclusion of E! News host Ryan Seacrest's annual red carpet preshow. Early last week, Variety published an investigative report that focused on Seacrest's longtime personal stylist, Suzie Hardy, who alleged that Seacrest subjected her years of sexual harassment, abuse and mistreatment that E! helped cover up.

The matter was officially closed by E! when the network concluded its probe in early February, saying in a statement at the time that outside counsel "found insufficient evidence to substantiate allegations against Seacrest." Nonetheless, many felt that Seacrest's inclusion at the Oscars, and ABC's continued relationship with him as host of American Idol, were an undermining affront to the progress that these causes have made over the past year.

In protest, several actors and actresses either gave passive-aggressive interviews to Seacrest, or snubbed him altogether. Taraji P. Henson, who went on camera with Seacrest, condescendingly touched pinched his cheeks and told him that "the universe has a way of taking care of the good people." E! putting Seacrest's coverage on 30-second tape delay suggests the network knew what they were getting into.

Ahead of presenting the award for Best Production Design, Lupita Nyong'o and Kumail Nanjiani shone a light on the plight of dreamers, the children of those who immigrated to this country illegally, by speaking about their own lives as immigrants.

“I’m from Pakistan and Iowa, two places that nobody in Hollywood can find on a map,” Nanijani joked.

By speaking to their own journeys, these influencers made their advocacy personal. Considering that today the Deferred Action for Childhood Arrivals program, which protects undocumented immigrants who came to the U.S. as children, was set to expire, the awards show provided a perfectly timed platform for this issue to be discussed. While a recent Supreme Court decision keeps the program alive for now, the future for dreamers remains unwritten.

Elsewhere in the show, Guillermo del Toro accepted his Best Director Oscar with a similar sentiment. "I am an immigrant, like Alfonso [Cuarón], Alejandro [Iñárritu], my compadres. Like Gael [García Bernal], like Salma [Hayek], and like many, many of you," he said after winning the award for Best Director. "And in the last 25 years, I've been living in a country all of our own … The greatest thing our art does and our industry does is to erase the lines in the sand. We should continue to do that as the world tries to make them deeper.”

What Would an Inclusion Rider Look Like in PR?

During her acceptance speech for Best Actress, Frances McDormand asked every female nominee to stand with her in solidarity. She then spoke directly to the bosses with the power to enact the representational change needed in Hollywood. "We all have stories to tell and projects we need financed," she said. "Don't talk to us about it at the parties tonight. Invite us into your office in a couple days, or you can come to ours, whatever suits you best, and we'll tell you all about them."

She also finished her speech with just two words—"inclusion rider"—a document conceived by Dr. Stacy L. Smith, the founder and director of the Annenberg Inclusion Initiative. A rider is a document that in which major stars would request additional provisions alongside their standard contracts, and an inclusion rider would require "that the minor roles of a film reflect the demography of where the film takes place, including a proportionate number of women, minorities, LGBTQ individuals and people with disabilities," explains the Washington Post. "Big name actors who have leverage in negotiations could put this stipulation into their contracts and drastically change representation in film."

But what would such a rider look like in our industry? The importance of a diverse, inclusive workplace for communicators is equally significant, not just for representation, but because a more diverse team leads to a more diverse client roster. The 2015 study, "An Examination of Factors Affecting the Success of Under-represented Groups in the Public Relations Profession," conducted on behalf of the City College of New York, found that cultural appreciation initiatives must be met with equal opportunity to make any lasting organizational change.

"Diversity initiatives would appear to be more effective when employers invest less in formal 'diversity programs' and more on supporting employees to build a genuine connection with other employees that makes them feel appreciated and welcome," the study reads. "The notion of 'diversity programming' without an understanding of why it’s being created and how it supports recruitment and retention does not move the needle to sustain and enhance diversity."

Of course, not all influencers are in a position to make such demands of an organization or production. Maybe some of our fellow communications executives ought to start working on their inclusion riders, too.