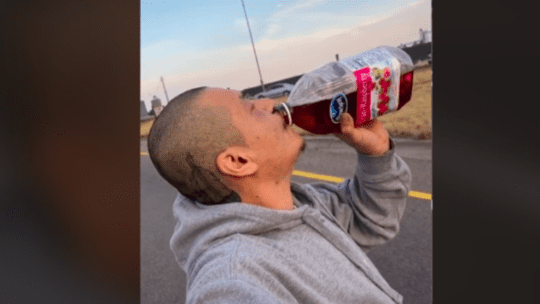 Viral success on TikTok isn’t usually something one associates with the corporate C-suite—until this week, that is.

On Oct. 6, Ocean Spray CEO Tom Hayes posted a version of the latest viral video craze to hit TikTok, which has since racked up more than 1.3 million views.

it’s the CEO of ocean spray skateboarding in his own merch for me ✨ pic.twitter.com/Y0Lc2mAdHd

Hayes’ video is a spin on one TikTok user 420DoggFace208 posted Sept. 25. 420DoggFace208 is the handle of Idaho warehouse worker Nathan Apodaca, 37. Set to the Fleetwood Mac hit “Dreams,” the original video shows a smiling Apodaca lip-synching to the tune while skateboarding and swigging a bottle of Ocean Spray Cran-Raspberry juice. It has seen well north of 4 million views as of this writing.

Squeezing out extra earned media juice, Hayes’ company donated a red pickup truck filled with bottles of Ocean Spray to Apodaca, who told the L.A. Times in one of many media interviews that his car battery had died (hence he's skateboarding to work.) The surprise gift video has racked up one million+ views on Instagram, exhibiting cross-channel appeal.

Behind the Scenes from my gift from ocean spray today.... love the cranberry red @oceansprayinc

There is little doubt as to why Apodaca’s original went viral. It is nearly impossible not to be charmed by Apodaca’s carefree aura as he skates along, particularly in a year when social media, once an entertaining diversion, can quickly give way to endless doomscrolling.

Apodaca gave TikTok users exactly what they wanted: good vibes in dark times. And, as the Boston Globe’s Anissa Gardizy points out, the TikTok algorithm is built to support the act of being cheered up on the internet by a stranger. In contrast, Instagram and Facebook prioritize accounts users already follow in the feed (although Instagram’s Reels offering aims to change that).

TikTok thrives on replication (or meme-ing, to follow Richard Dawkins’ definition), tying back to its original roots as a lip-synching app. When a user posts a memorable dance, lip-synch, “challenge” or physical action (like skateboarding)—and the algorithm sees other users enjoying it—the participatory nature of the TikTok community spawns endless spinoffs.

Numerous cultural figures and brands have taken Apodaca’s lead, not least among them Mick Fleetwood, who launched a TikTok account just to post his version of the video. “Dreams and Cranberry just hits different,” Fleetwood’s video caption reads. (The original song has quadrupled in digital sales and re-entered the charts since Apodaca went viral). Dr. Phil, the U.S. Army and Barstool Sports all posted renditions of it.

Ocean Spray’s donation and its CEO’s goofy video painted the brand in a positive light, and allowed the company to join the trend without detracting from the “good vibes” message that charmed millions. Avoiding the pitfall of an overly forced approach to social media, Ocean Spray’s entrance into the narrative was entirely organic (its product was featured in the original video, after all).

The juice company’s PR team deserves an elbow bump. So far, the truck donation story and Hayes’ video have seen pickup in local and national outlets, including Forbes, NBC, TMZ, The Boston Globe and trade publications from Ad Age to The Drum.

This latest victory for cranberry juice lovers everywhere should remind communicators not to ignore TikTok, even if they don’t believe their target audience is using the app. TikTok content is making its way onto other platforms and being covered by mainstream media, and given Fleetwood’s and Hayes’ high viewer counts, one doesn’t need an existing stream of content to make a splash.