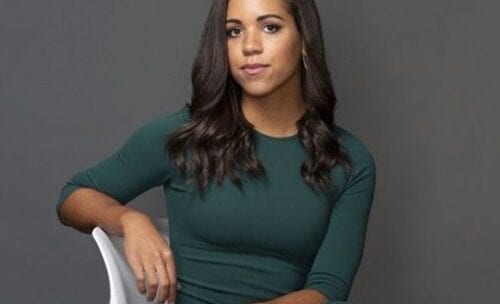 Any publicity is good publicity, right? Maybe not.

Just weeks ago, Alexi McCammond seemed to be living a dream life. A young, telegenic star of the Washington press corps, McCammond was getting Axios bylines for coverage of the Biden campaign, making regular appearances on MSNBC and moving up the ladder on “Axios on HBO.” All this and McCammond wasn’t yet 30.

Things started to change in November. Her brand took a minor hit when McCammond admitted to her bosses she was in a relationship with TJ Ducklo, a deputy White House press secretary for the Biden-Harris administration. The two met on the campaign trail. Ducklo was a Biden campaign press secretary. McCammond, as we said above, covered Biden for Axios.

Not to worry. When a Feb. 8 People article exposed the relationship, McCammond was months ahead of the story. As noted, she’d informed Axios in November.

She was reassigned to cover progressives, including VP Kamala Harris. Not the plumb assignment she’d had previously, covering Biden, but you could do worse than chronicling the country’s first Black, female veep.

First Out the Door

Just days after that, Ducklo fell into the soup. A Politico reporter, Tara Palmeri, was working on a story about Ducklo’s relationship with McCammond. Ducklo, according to a Vanity Fair report, threatened Palmeri. “I will destroy you,” Vanity Fair said Ducklo yelled at Palmeri.

When the Vanity Fair story appeared Feb. 12, Ducklo was put on a one-week suspension without pay.

The next day, Feb. 13 Ducklo resigned, becoming the first casualty of the Biden administration’s no-tolerance policy.

My statement on resigning from the White House. pic.twitter.com/3Jpiiv75vB

Still, McCammond forged ahead. She’d laid low immediately after stories about her relationship with Ducklo, avoiding her weekly TV appearances on “The 11th Hour with Brian Williams.” Slowly, though, she returned to the screen. All seemed well after a bump in the road.

Then McCammond made headlines again. Condé Nast nabbed the 27-year-old to head Teen Vogue, as editor-in-chief. Possibly due to the headlines about her personal life with Ducklo, McCammond’s new job received a lot of mainstream coverage, including a good-size story in The New York Times.

Dissension in the Ranks

Within days of that announcement, though, the stakes rose again. Twenty members of Teen Vogue’s staff rebelled over the new editor's past anti-Asian tweets. McCammond wrote the tweets in 2011 and 2012, while matriculating at the University of Chicago. One tweet mocks physical features, the other whacks a teaching assistant who gave McCammond a bad grade on a chemistry assignment.

While racist tweets always are deplorable, the timing was especially bad. Possibly owing to the previous president’s labelling of the coronavirus as “the China flu,” racist attacks against Asian-Americans are rising.

McCammond apologized twice last week. She noted she'd also apologized for the tweets previously, in 2019, when they resurfaced. McCammond has said the tweets do not reflect the person she is today. Many argue her work at Axios corroborates that view.

I hope you'll read this note from me to the @TeenVogue community, staff, readers, writers, photographers, content creators, and friends: https://t.co/ROoovqQHLX pic.twitter.com/85T8XBJULn

Our question to PR pros: Is there an informal statute of limitations on tweets? Particularly when offending tweets were the products of youth? What about forgiveness and transformation?

While Hana Bieliauskas, VP, Inspire PR Group, believes McCammond has grown in her views in the 10 years since the tweets; however, "past social media posts don’t 'expire' and, unfortunately, these tweets, deleted or not, will follow her."

It isn't when the tweets were posted, says Michael Becce, president and founder, MRB Public Relations. The apologies are problematic. "Apologies that happen decades or years later always seem in-genuine, regardless of how heartfelt they are," he says.

Both PR pros touch on the foundational lesson of McCammond's story: There's no hiding on social media.

"What one shares online never goes away and will follow you forever," Bieliauskas says. Becce adds a corollary: Posts stick to you forever unless "they're responded to immediately."

Another factor is McCammond's quick rise to fame. "Getting the opportunity to take a prestigious position always will cause ire in others," Becce notes. If there are negative things that you’ve done or said online in the past, people–including overlooked employees, competitors or those slighted in the past–"will make a point to look for and find it," he adds. "Brands need to make sure they do their due diligence before making hires and find what others may dig up."

Owing to McCammond's 2019 apology, Becce and Bieliauskas believe Condé Nast knew about the tweets when it hired her. [Editor's Note: Condé Nast knew of the tweets before hiring McCammond, an executive confirmed as the company announced her departure, March 18, 2021. For more, see update at the end of this story.] Bieliauskas's view is that given the moment, where attacks against Asian-Americans are rising, "Condé Nast could have considered more carefully" how the posts might "reflect on brand values...especially when hiring [McCammond] to lead a publication with an audience mainly of young adults, who are shaping their perceptions of the world."

Becce believes the company missed a chance to use the hiring as "a platform" for McCammond to correct her past mistakes.  "Maybe start out with a story exposing the wrongs and interviewing her and her professor," he says.

Bieliauskas agrees. Earning the trust of Teen Vogue's staff and readers, she says, will require McCammond "to take meaningful actions to show her thinking has greatly evolved."

Bieliauskas holds out the possibility of redemption. Since McCammond sent the tweets as a teen, perhaps she and Condé Nast could use the moment to engage with similarly aged readers "and share why recognizing and addressing racism and racial bias are so important."

McCammond is slated to start her new post March 24. It's already been a job.