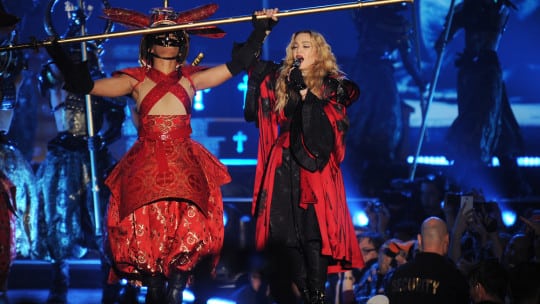 On Sunday, Aug. 19, MTV broadcasted its annual Video Music Awards (VMAs), much to the delight of music publicists across the world. While our social channels were flush with highlights from the show, including Kevin Hart's dig at Trump, Ariana Grande's powerful performance of "God is a Woman" and Cardi B throwing shade at Nicki Minaj, one moment captured enough attention to continue trending on Twitter two days later—for all the wrong reasons.

While presenting the award for Video of the Year, Madonna took the opportunity to deliver a lengthy speech about how her career was inadvertently shaped by the late Queen of Soul Aretha Franklin, who died Aug. 16. Reactions to the speech were overwhelmingly negative, with amateur and professional critics alike voicing their belief that Madonna disrespected Aretha by making the speech largely about herself, relegating Aretha's influence to nothing but a footnote in Madonna's story of her own rise to stardom.

Buried in Madonna's tribute are also a few lessons for communicators about how not to give a public speech. Here are some of those takeaways:

"I" don't want to hear it. As any long-form journalist will tell you, the word "I" should be peppered into your writing sparingly, or better yet, not at all. Gratuitous use of "I" is regarded as a sign of lazy writing, as there are far more subtle ways to tell a first-person story without making it sound like it's all about you—after all, the story is already being narrated from your perspective. Gratuitous "I"s can make the narrator seem biased, not authoritative, and if the speech is about their relationship to someone else, it can make the narrator seem downright self-obsessed.

When talking about a case study from your organization, for example, "we" fosters a much more communal message, even if you were the one responsible for driving the story forward. Your efforts and leadership will still come through via the authority of personal perspective in your storytelling—without those distracting "I"s.

How it reads will tell you how it sounds. It's not uncommon for amateur speakers to fall into the trap of deviating from the main focus of their story when speaking, and once you've earned the title of "diva," some degree of focus on yourself is to be expected. Nevertheless, had Madge looked at a transcript of her Aretha speech before giving it, the self-centered nature of her speech that was meant to honor Aretha would have become glaringly apparent.

Just as it's always a best practice to read your editorial copy aloud before filing a story, anyone giving a speech should always look at how it reads in print. Story structure can be tough, but once everything is laid out on the page, structural inconsistencies become hard to ignore.

Anecdotes should sound anecdotal. Imbalances between her personal story and Aretha's aside, Madonna's speech was universally derided for being way too long. Had the majority of its content been about Aretha, complaints about its length may have instead been praises about the speech's "epic" and "career-spanning" insights on the Queen of Soul. Because it was barely about Aretha, though, the speech instead felt drawn-out and insultingly egotistical.

The point is, always get straight to the point. Writers and public speakers often fall into the trap of "throat-clearing," or the act of dancing around the subject in order to create some ornately-styled introduction or thematically-rich context. There's room for that later on, once you've highlighted exactly why you're speaking about the topic or person at hand.

Just like with the classic "inverted pyramid" style of hard news writing, start with the most important facts of your story at the beginning, and insert the other details later on. As readers and listeners, we're so subconsciously conditioned to this type of story structure that the beginning of a speech largely implies what we believe the focus of its content should be. That said, starting a speech about someone else by focusing on yourself is a surefire way to make the audience think it's really all about you.