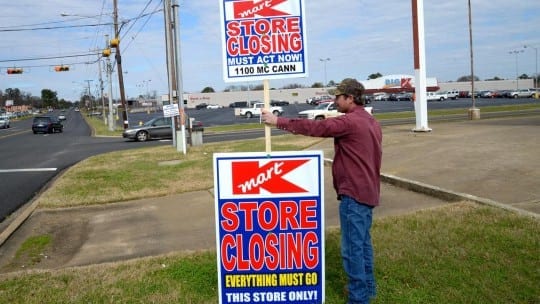 Employees at Kmart’s 941 remaining stores believe the company is approaching bankruptcy and will be closing all its locations, despite comments indicating the opposite from parent, Sears Holdings, Business Insider reported July 23.

After speaking to employees and reviewing an online message board that workers use to communicate with each other, Business Insider found that the recent implementation of “path to profitability” plans left many store-level employees fearing the worst.

“We cleaned out the stock room about 3 months ago… We let most of the full timers go around 4 months ago… We still have our 2 [assistant] managers but we haven’t had a store manager in almost a year,” said an employee on the message board.

Decisions such as moving all remaining stock to the sales floor and an alleged erosion of available work hours are making many employees believe the company is preparing for a nation-wide liquidation of its stores.

However, the message that Kmart’s corporate owners are communicating isn’t nearly as focused on doom and gloom.

“Sears Holdings is highly focused on restoring profitability to the company, and Kmart remains a key piece of our asset portfolio,” said Sears Holdings’ spokesman Howard Riefs. “We are currently rolling out a phased project to refine our inventory replenishment process whereby deliveries are directed to Kmart store shelves instead of the stock rooms.”

Regardless of whether or not Kmart stores remain open for the foreseeable future, the C-suite and rank and file employees hold dangerously opposed beliefs about the company’s plans. Such a deep chasm within an organization is nothing short of a crisis caused by a failure of internal communications.

Long-time employees have seen the company shrink in response to declining sales—Kmart closed one-third of its stores in the past ten years and shuttered 48 this past April alone, according to Business Insider and Fortune, respectively. Left with little faith in the ability of the company to turn itself around, employees either don’t believe what they hear from corporate, or aren’t properly informed as to the strategy behind recent business decisions.

This kind of communications breakdown can’t be allowed to continue if Sears wants to catapult the company into the black.

When an organization falls on hard times, employees become arguably its most important constituency. They are the front line of the business, often the first and last touches a customer encounters during a trip to a brick-and-mortar business. Kmart and Sears have serious work to do to make communications between corporate managers and store employees more transparent and efficient. Low employee morale will only slow the brand’s turnaround. Unfortunately, assuaging employees’ concerns over the security of their jobs is just a small but essential step on the long road back to profitability.