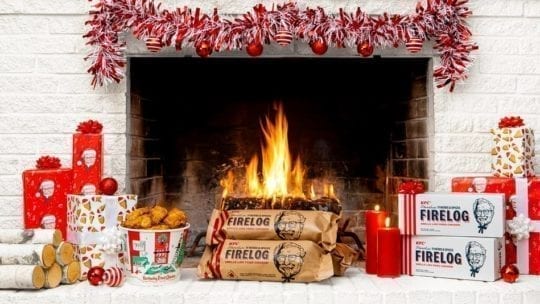 If it seems that the holiday product push comes earlier and earlier every year, well, you're not wrong. The more intense our news chyrons, the greater our culture feels the need to revel in the tradition, nostalgia, and corporately-sanctioned joy that amount to the spirit of the season. That's when the media marketing push arrives.

At PRNEWS, we've looked at impressive branded holiday swag and gifts for PR pros. But when it comes to feeling warm, fuzzy and full of mirth, there's still nothing better than a PR campaign with takeaways for you, our readers.

So please, put down the eggnog and indulge us as we look at holiday PR efforts that fill us with cheer.

You've likely heard this holiday ear-worm of a song playing in four of the five stores this holiday season. Above is a new narrative video remaster of Mariah's ubiquitous holiday classic, which turns 25 this Christmas despite being, by even the most jaded of opinions, timeless.

For the song's 25th, Mariah asked fans to help it reach #1 on the Billboard Hot 100 singles chart. That's something it had yet to do, despite it being practically everywhere, every year.

"No matter the means by which it got there, the accomplishment is undeniable: the song is 25 years old, it’s taken the longest of any No. 1 to reach the top spot, and it’s the first holiday tune to do so in 60 years," reports Fortune. "Plus, it gives Carey her 19th No. 1 hit—just one shy of the record-holding Beatles."

So how did it get there? While it seemed like an example of fans giving back to their diva queen after she published a lo-fi annual skit urging them to upvote the track, the surge in popularity was part of a calculated, annual marketing push.

“Every year we focus a campaign around new ways to market ‘All I Want for Christmas’ because the opportunities for people to hear this perennial classic just seem to grow and grow,” Rob Stringer, chairman of Sony Music Group, told The New York Times by email.

That push has included live concerts, an animated film, branded content pieces, a mini-documentary and even a children's book. All firmly establish Carey as the undisputed Queen Diva of Christmas.
PR pros, take note—this is what a multi-channel strategy looks like. It involves marketing and communications departments working in symbiotic, Yuletide harmony. If that doesn't make you feel warm and fuzzy, we don't know what will.

There's also a lesson in the power of repurposing content across all channels. Working with what was essentially one song, Sony Music's creative team unleashed the powers of multi-channel marketing, communications and good ol' vertical integration. It ensured that the song was absolutely everywhere, whether you wanted it or not.

When working with a particularly powerful piece of content, recording, writing, or otherwise capturing it in a manner that allows it to be used in many different formats or mediums—from its creation—ensures many, many happy returns.

The undisputed king of fast food, seasonal, limited-run branded merchandise, KFC shocked the world in 2018 when it unveiled a firelog. Fried chicken-scented, the wood included the Colonel's secret blend of 11 herbs and spices. They sold out in three hours.

It took a little longer in 2019, but the logs sold out again. Though critics have said things like "meat out of context is not a good smell," the market has spoken. By aligning itself with the novelty and goofiness of a limited-edition gag gift, KFC tells anyone with either an affinity for fried chicken, or Christmas levity, that its brand should be associated with fun on the holiday.

To fully appreciate the appeal of branded Christmas product pushes, we turn to KFC's near-cult-like stranglehold on Japan. Wired's retelling of the brand's fascinating history in Japan is worth a read.

"Between December 23 and 25 is when KFC Japan has its highest sales of the year," the article says. "All in all, the company sells approximately 300,000 party barrels and 800,000 Christmas packs during this peak season, which accounts for about a third of the chain’s yearly sales in Japan... Every year, there are lines out the door, starting on December 23, and Christmas Eve is the most popular date – about ten times busier than normal."

Social Good on the Rails

In the spirit of a season, we'll tip our hat to another PR trade seldom mentioned here on PRNEWS, and the results of its poll for the best Christmas campaigns of the decade—the winner is Virgin Trains's 2018 effort, "It's a Wonderful Line."

"This campaign, by The Romans, brought a relevant and positive Christmas message to passengers, as the entire script of the iconic Christmas film 'It’s a Wonderful Life' was painted on train platforms at from London to Glasgow," PRWeek writes. "The campaign was based on insight from Samaritans and Rethink Mental Illness that showed a correctly timed intervention at a station can be all that is needed to prevent a potential suicide."

There's a lot to love in this campaign, including the way that Virgin Trains, The Romans and their nonprofit partners activated Virgin's (literal) footprint to widen the impact, and proximity of its social good message. Centering this campaign around a Christmas classic, one with themes and a message that's so widely-known, is another example of repurposing content—even if it's not yours.

Teacher says that every time a bell rings, a multi-channel communicator gets its wings. From all of us at PRNEWS, Happy Holidays, to you and everyone you care about.