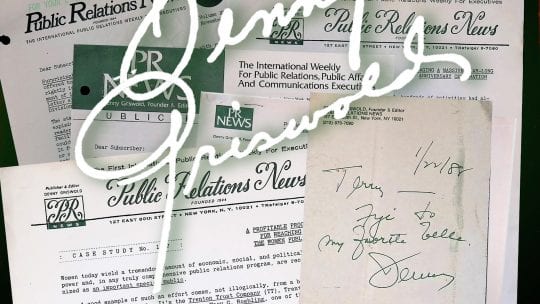 [Editor's Note: Today, March 24, not only is Equal Pay Day, it's fittingly also the birthday of PRNEWS' founder, whom you'll read about below. This year's birthday is particularly noteworthy in light of a package received recently at the Museum of Public Relations. Its contents don't quite equate to the discovery of a Mozart symphony in a Denmark cellar in the 1940s. Still, for PR historians, it's a significant find. The Museum's founder, Shelley Spector, picks up the story.]

A large box stuffed with long-lost issues of PR News newsletters and hand-written notes arrived at the Museum of Public Relations in NY last week.  The issues–from the early 1970s to early 1990s–were stored in the archive of a PR historian. How did these issues and notes get to the historian? What was the collection’s provenance?

After much digging through the archive, we discovered that the newsletters were part of a collection of  Park Ave. jeweler Terry Mayer. Upon further review, we learned Terry was the 'personal' jeweler of Denora "Denny" Griswold (1908-2001), founder of PR News.

Terry sold or lent Griswold the diamond-studded necklaces, bracelets and earring sets that helped Denny stand out at multiple galas Denny organized each year. Terry kept track of what Denny wore to each event, assuring she would not wear the same jewelry more than once.

Anyone who knew Denny would not be surprised that she had a 'Terry' in her life. Terry helped maintain Griswold's acclaimed image. To the PR industry, Denny was a star. She rightly deserved the respect, admiration and awards bestowed on her. To Jack O'Dwyer, who launched a competing newsletter in 1968, Denny was the "closest thing the industry has to a celebrity."

As publisher of the industry's first newsletter, Denny was also the field's biggest cheerleader.

She wanted to raise the prominence of PR beyond the industry itself. Through her celebrity status, she was able to take the message of PR's value directly to CEOs, an extraordinary feat, given that she was not only a woman but one representing an industry that mid-century executives barely understood.

Denny seemed to be constantly putting on some social function or other: whether a luncheon for corporate CEOs (during which she would literally teach them the benefits of PR), cocktails for agency heads (who craved and clamored to be covered in the newsletter) or PR awards banquets, the most lavish affairs in the industry at that time.

Denny's events resembled star-studded, private Oscar-nomination parties far more than celebrations of PR campaigns. Held at the Pierre Hotel in Manhattan, they were the kind of affairs–befitting the era–at which women wore sequined dresses, with veiled hats and matching gloves. Despite the competition, Denny always stood out.

The early 1970s through early 1990s was one of enormous growth for PR. Thanks, in large part, to Denny's advocacy, PR offered enormous growth in opportunities for women. Denny started the first organization for women in PR: Women Executives in PR. It had just six members initially. However, Denny knew that it was only a matter of time before more women would assume high roles in the field.

Just like the ubiquitous green PRoud to be in PR pin she'd give out liberally, Denny used green ink to print the PR News newsletters, mailed weekly to loyal subscribers. Denny would send new subscribers binders to hold the newsletters; they were green, too. Thus, PR News grew to become a living reference guide, and never outgrew its usefulness.

There's really no such thing as an overnight success. So it was with PR News. Denny conceived the idea after years as an editor for Forbes and BusinessWeek. Importantly, she also spent time at the PR firm of the legendary Edward L. Bernays.

She felt that a field growing as fast as PR needed a newsletter. And so, in 1944, she created the field’s first one. Public Relations News, now PRNEWS, became so influential in building PR’s reputation as an industry, that Denny was awarded 130 honors during her most remarkable life.

After digitizing the collection of newsletters in the box as part of a larger effort, the Museum's next objective is to find issues of the newsletter dating back to its founding, in 1944.

Shelley Spector is founder of the Museum of Public Relations