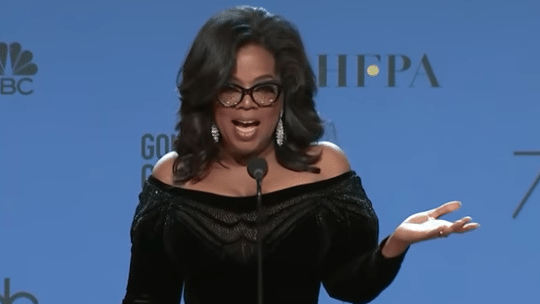 The Time's Up movement took the spotlight at the 75th Annual Golden Globes, as the issue of sexual harassment was highlighted from the red carpet to the stage.

The awards show provided a high-profile platform for the same industry that launched the #MeToo movement to further the ongoing national conversation about sexual misconduct. In the weeks leading up to the event, Time's Up activists had called for those attending to wear black in solidarity and to use the occasion to speak out about sexual harassment.

And from the first words spoken by host Seth Meyers—"Good evening, ladies and remaining gentlemen"—the issue that has consumed Hollywood for months was felt in both subtle and overt ways. Here are three of the top Time's Up messaging moments from Sunday's star-studded event.

Will & Grace star Debra Messing started the night off with a bang while being interviewed on the red carpet by E!. The entertainment network was recently embroiled in a #MeToo scandal when E! News anchor Catt Sadler quit her job after revealing the "massive pay disparity" between herself and co-anchor Jason Kennedy. And Messing, one of the first people interviewed by the network Sunday night, didn’t hold back.

"I was so shocked to hear that E! doesn’t believe in paying their female hosts the same as their male co-hosts," Messing said Sunday night to interviewer Giuliana Rancic. "I miss Catt Sadler. We stand with her. That's something that can change tomorrow. We want people to start having this conversation that women are just as valuable as men."

.@DebraMessing calls out network to its face for paying men more than women. So much more interesting than “Who are you wearing?” pic.twitter.com/R6tNTJDutx #GoldenGlobes #timesup

Oprah Brings Down the House

The theme of empowerment running throughout the event reached a crescendo when Oprah Winfrey gave an inspiring speech in accepting the Hollywood Foreign Press Association's Cecil B. DeMille Award.

Winfrey—the first black woman to receive the award—opened her speech noting how inspiring it was to see Sidney Poitier become the first African-American actor to win the best actor Oscar in 1964. She then talked about Recy Taylor, an African-American sharecropper who was raped by white men in 1944, a case that was never brought to trial. Taylor recently died on Dec. 28.

"For too long, women have not been heard or believed if they dare speak truth to the power of those men. But their time is up," she said. "I want all the girls watching here now to know that a new day is on the horizon. And when that new day finally dawns, it will be because of a lot of magnificent women, many of whom are right here in this room tonight."

"We are honored … to be here to present the award for best director," said Howard.

"And here are the all-male nominees," Portman said.

"Here are the ALL-MALE nominees." Natalie Portman presents the names for best director of a motion picture. #GoldenGlobes https://t.co/zYXYaG0ma7 pic.twitter.com/tIosfUGaCt