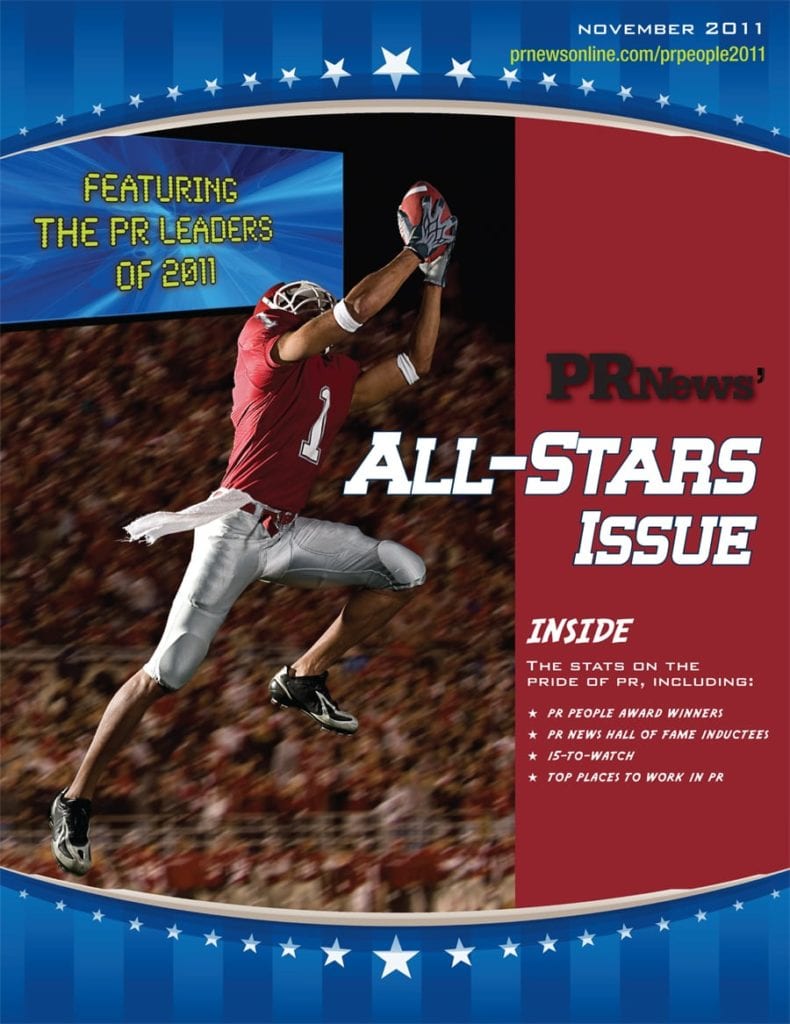 More than 200 elite PR professionals packed a ballroom on Wednesday at the venerable National Press Club in Washington, D.C., for the annual PR News PR People Awards luncheon, which also featured the induction of six PR Hall of Famers, the Top Places to Work in PR and the 15-to-Watch honorees—an already accomplished group of PR up-and-comers. PR News' All-Stars issue to learn more about all the honorees.

Kicking off the day were the PR People Award announcements, with Julie Harkavy Fisher, executive VP at Weber Shandwick, taking home the award for Account Director/Supervisor of the Year, notably for her work with client Electrolux.

Dallas Lawrence, chief global strategist at Burson-Marsteller, and Cindy Sanders, regional director of public relations at Wellpoint, were co-winners in the Crisis Manager of the Year category—Lawrence for his work with the Nuclear Energy Institute after the earthquake/tsunami in Japan, Sanders for her keen strategy following a security breach at Wellpoint.

The PR People Awards segued into a luncheon keynote by personal branding pioneer Samantha Ettus, author of the Personahood blog for Forbes.com. Ettus discussed how social media and personal branding are putting individual leaders in the spotlight in completely new ways. In shaping a CEO's story, she suggests that PR practitioners should not concentrate on numbers and accomplishments. People want to hear unique stories, she says. “My CEO was the first on his block to have a lemonade stand,” says Ettus, as an example. “You must put gems within your client or leader’s stories.”

Asked to offer the best advice they’ve received in their careers, John Edelman, who accepted the award for his brother Richard, said, "Get to know the media, and know what the stories are."

Deveney said the thinking about the question brought him to this conclusion: "I’ve accomplished absolutely nothing on my own. I’ve been incredibly fortunate, working with amazing people, and I’m blessed."

Waggener Zorkin relayed some advice she got from her client Bill Gates: “Be relentlessly focused and curious.”

The 15-to-Watch honorees also discussed the best career advice they'd ever received. Karen Nichols, who leads spirits company Diageo’s PR efforts in Mexico, may have said it best: "Pick up the phone and talk to people; worry about the engagement, not the numbers; meet often with the media; and always bring a bottle of Johnnie Walker.”

For such a celebratory day, that might have been the best piece of advice of all.

(See below for the full list of PR Hall of Fame inductees and PR People Award winners and honorable mentions. Click here for the 15-to-Watch honorees and here for the Top Places to Work in PR.)

Congratulations to all of the winners and honorable mentions!

John Deveney likes to lead people into PR battle. Whether establishing on-site communications operation and media centers during hurricanes Katrina and Rita, or creating and leading the Louisiana Office of Tourism’s response to the BP oil spill, he gets great satisfaction from leading teams of others—and making them better communicators. Enthusiasm has fueled Deveney’s communications success, as he moved through government, hospitality, education and healthcare sectors before opening his own agency in 1996.

Deveney, who made PR News’ first 15-to-Watch list in 2000, has some advice for this year’s crop: “To achieve balance, discover who you are. What brings you joy? What are your passions and priorities? It takes a lifetime and true effort to discover these things. But as you discover them, let them direct you: Do what you love and do it in your own way.” —SVC

For 60 years Edelman has remained an independent, family-owned agency. For Richard Edelman, that’s a source of deep pride. “Our independence has allowed us to consistently put the interests of our clients and employees first, and to invest in our company and its future,” he says. The agency’s president and CEO since 1996, Edelman has extensive experience in marketing and reputation management, and has counseled several countries on economic development programs, including Egypt, Israel and Mexico.

Today he is charting a course for “public engagement,” which reflects the evolution of business as a positive force in society, and calls for business to participate meaningfully in the continuous global conversation. “Public engagement is policy and communication unified to realize the full aspiration of PR,” says Edelman. “Our role as practitioners is to have one foot planted in policy and the other in communications.” —SVC

After eight years as VP of corporate communications at American Airlines, in October 2011 Roger Frizzell moved on to California-based energy company PG&E, becoming its chief communications officer. And just like he did at American, Frizzell will concentrate on improving customer service while cementing PG&E’s reputation—both externally and internally.

“The most successful companies are those that work night and day to build deep, solid relationships with their customers and employees,” says Frizzell. A four-time All-American wrestler from Univ. of Oklahoma, Frizzell is used to grappling with tough PR problems. On that end, Frizzell advises not to be afraid to fail. “Think outside the box, and don’t be afraid to take risks,” he says. —SVC

To say that Mary Henige has seen it all at General Motors would not be an overstatement. It’s been 25 years since Henige began her career as an exhibit representative at GM’s former World of Motion pavilion at Epcot Center, Walt Disney World, in Orlando, Fla. Since that time, she has held a variety of communications positions with the iconic American car manufacturer.

While today’s work just may be her most important—putting the revitalized GM in the hearts and minds of the online public—it’s the communicators coming up through the ranks that give her a thrill, as she has led GM’s communications internship program for nearly a decade. “I’ve learned so much from these new professionals—they renew my enthusiasm for this profession,” says Henige. —SVC

Dave Senay has worked across multiple communications practices throughout several regions of the world—including Europe, the Middle East and Africa—leading account teams in industries ranging from telecommunications and information technology to healthcare, food and automotive. Senay was named president and CEO of Fleishman-Hillard in July 2006, and made a full-fledged commitment to “switch on” the agency, integrating digital into every aspect of the business.

His proudest accomplishment: “Growing one of the world’s premier communications firms in an era of great economic challenge and industry change, while maintaining a culture of respect for the individual that attracts the world’s best talent.” —SVC

In 1983, Waggener Zorkin formed an agency with business partner Pam Edstrom. Today, Waggener Edstrom has grown to more than 800 employees, a fact that Waggener Zorkin takes great pride in. “Without a doubt my proudest accomplishment has been our ability to build a large, independent agency that continually gets and keeps great people,” she says.

While giving props to employees, it’s well known that Waggener Zorkin takes a hands-on approach to leadership, continually expanding into new practice areas, serving global healthcare, consumer PR and marketing, corporate communications and public affairs clients. She believes that even with the advent of digital and integrated influence, “the essence of relationships, storytelling, engagement and driving all of those to impact is intrinsically tied to the future of PR.” In other words, with communications, it’s back to the future. —SVC

Brand Marketer of the Year

PR Professional of the Year – Agency

PR Professional of the Year – Corporate

Publicist of the Year