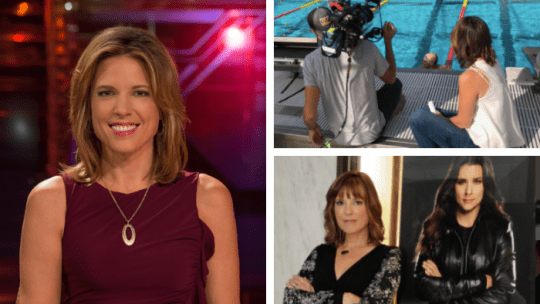 Each year, PR News’ Platinum & Agency Elite Awards celebrate the best storytellers and campaigns the world has to offer. This year, the Awards will be hosted by ESPN anchor, journalist and filmmaker Hannah Storm, a master storyteller in her own right and founder of film company Brainstormin’ Productions and The Hannah Storm Foundation, which raises money for children born with vascular anomalies.

At a fireside chat exclusive to Platinum & Agency Elite Awards attendees, Hannah will share her insights on visual storytelling and branded content, as well as her vision of influencer relations and the media landscape. In anticipation of the Platinum & Agency Elite Awards luncheon, which will be held Sept. 21 at the Grand Hyatt in New York City, PR News spoke with Hannah about her latest projects and her view of PR in 2018.

PR News: What projects have you worked on recently that you’re most excited about?

Hannah Storm: I produced and directed two films that came out recently. They were big passion projects of mine that came to fruition, which was incredibly gratifying.

The documentary “Danica” featured [former NASCAR driver] Danica Patrick for EPIX. I loved being able to highlight this incredibly strong woman. She was wondering about her future outside of NASCAR and honing in on some of her personal passions, which she has made into businesses to sustain her life after NASCAR.

I had another film on the SEC network called “Rowdy” about Olympic [swimmer and] broadcaster Rowdy Gaines and the boycott of the Moscow Olympics during the Jimmy Carter era—and how he came back and won a gold medal in Los Angeles.

I come from a news background as well as a sports background; I was at CBS News for six years. So I love being able to meld those two worlds, a political and news-oriented event and a sports story—and how things all collided on a very personal level.

PR News: How did you come to found your production company Brainstormin’ Productions? How does Brainstormin’s mission intertwine with that of your charitable foundation?

HS: I started Brainstormin’ after I left CBS News and before I started at ESPN. I had always wanted to tell stories according to my vision.

I moved my daughter out of her bedroom and made her bunk with her sister—so in a little bedroom in my house, with my partner Carmen Belmont, we started both a production company and a charitable foundation.

I knew that wherever I went, I wanted to grandfather those two things into my next job. So from the ground up, I started both.

We have done quite a bit of branded content at Brainstormin’, and also a number of films. The overall tenet of what we do is inspirational and aspirational. There’s a strong storytelling element to everything we do on the production side.

It has been gratifying to get on the other side of the camera, to be able to produce and direct. I have not been in any of my films at all—I haven’t even voiced them over. It’s been an incredible experience to be able to tell these stories.

The Hannah Storm Foundation has funded a number of surgeries for children around the world who are suffering from vascular anomalies and debilitating, disfiguring birthmarks. I have devoted an enormous amount of time and personal resources, a lot of sweat and equity into both of those things and they’ve both been very fulfilling.

PR News: As someone who comes from a news background, what’s your advice for PR professionals looking to build better relationships with the media?

HS: I’ve found that most relationships in business, whether between PR and the media, the media and athletes or filmmakers and their subjects—in this world of content that is seemingly never-ending—come down to personal relationships.

Authenticity is at the forefront: That’s how you build trust. And when I talk about an authentic place, I mean a place of real personal passion.

People in all industries are acting as their own PR person, saying, “This is what I want the world to see.” They’re tweeting. They’re making their own videos and content.

I would urge PR people to tap into what’s important to their clients. Ask what they want to get across to the world, and enable them to do that. Instead of an older model of “here’s the image you need to project to the world,” now it’s more from the inside out.

We’re seeing all sorts of public figures having a really good idea of who they are. A PR person can get to the bottom of that and really help a person maximize it—whether it be on social media, directly or targeted in terms of specific articles, and people they talk to.

HS: I try to keep social media in a healthy place. I have older kids and I understand the perils of constantly being attached to your phone.

For instance, I was recently at a party after the ESPYs, and it was so much fun! There was a DJ, and some people were having a great time dancing and socializing. Some people were glued to their phones the entire time. And it was a real microcosm of: Are you going to live your life, or are you going to be attached to social media?

So I use social media, but on a limited basis, and always for a reason. I won’t ever tweet or Instagram anything just for the sake of it.

I use Twitter as a way to gather information. I may forward my followers something they’re interested in. I use Instagram for partners that I have. I have a partnership with a company called Sun Basket, so I share food—I’m a passionate cook.

If I’m in a particularly joyous moment with my family, I’ll share that. Sometimes I’ll join a national conversation, [like] National Dog Day—I love my doggies.

I’m not aggressively posting, but I’m definitely a presence. And I think a thoughtful network of people makes a lot of sense for businesses and for individuals.