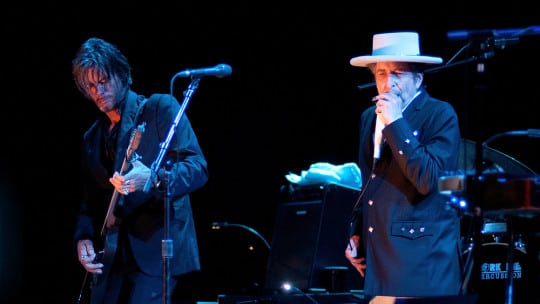 There may be no larger figure in American music, living or dead, than Bob Dylan, who this week was awarded the 2016 Nobel Prize in Literature for "having created new poetic expressions within the great American song tradition." A disciple of Woody Guthrie and other folk music heroes, Dylan brought their socially conscious ethos to a wide audience, eventually translating it into an electric rock-and-roll context and becoming the inspiration for many generations of musicians around the world.

In PR, it's crucial to get a point across without writing a sprawling essay; in this way, we can all learn from Dylan. Though he wrote many a long-winded song, he also had a way with a pithy one-liner that sticks with people. These are lines that could serve as epigrams to novels and slogans on protest signs—and 50 bucks says that all of the below have been tattooed on somebody at some point. If we all meditate on what makes these lines so effective, we may unlock some key lessons about connecting with an audience in an instant.

You can appreciate this lyric even if you don't recognize the reference to the 1970s radical-left group the Weather Underground. It speaks to the power of intuition, and a disregard for (and even contempt of) authority figures and experts who would presume to correct you. Professor Alex Long (University of Tennessee) found that Bob Dylan is quoted far more than any other songwriter by judges and lawyers in American legal writing, and this line is his most-quoted.

"Your sons and your daughters are beyond your command"

— from "The Times They Are a-Changin'"

There are numerous quotable lines in Dylan's famous anthem of change, but this one seems to summarize them all. Things are different now than they were then, and the structures and systems of old are always ready to be overthrown. You are not beholden to your creator, and the things you create are not beholden to you. Importantly, this is a line that every generation claims and thinks is about them—an inspiring lesson for writers who would seek to reach a wide audience.

"He not busy being born is busy dying"

An existential crisis in eight words, this lyric not only spans all human lives and dwarfs their significance, it makes it sound like work simply to be. In the meantime, it teaches us economy of language along with the rhetorical strategies of parallelism, repetition and antithesis (the use of contrasting words, often in parallel structure). It sounds downright biblical, which is probably why it sticks in the mind so effectively.

"You never ask questions when God's on your side"

Irony is important, and this is a deeply ironic line from a deeply ironic song about justifying war and death through religious belief. Even divorced from that context, the line packs a punch by making a bold statement atop a shaky logical foundation. The listener might ask, "why wouldn't one ask questions?" or "how would one know God's on one's side in the first place?" It's a classic way of prompting listeners to do their own thinking rather than telling them what to think—and yet, at the same time, it does tell them what to think. Sneaky.