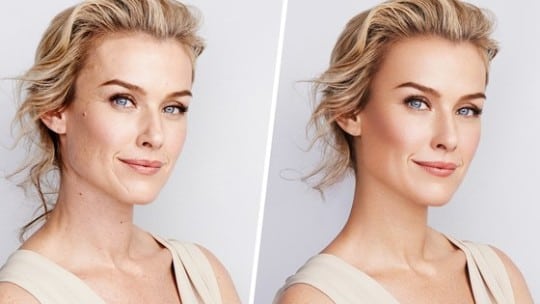 In an effort to combat harmful advertising in the beauty industry, CVS has made a commitment to keep it real.

The retail chain has unveiled its Beauty Mark campaign, promising that it will no longer "digitally alter or change a person’s shape, size, proportion, skin or eye color or enhance or alter lines, wrinkles or other individual characteristics" in the imagery it creates for its stores and marketing.

As part of the campaign, CVS introduced a watermark that notes authentic imagery in its product labels and advertising, according to a press release announcing the initiative.

"We want our beauty aisle to be a place where our customers can always come to feel good, while representing and celebrating the authenticity and diversity of the communities we serve," the statement read.

With Beauty Mark, CVS has gone beyond a simple announcement or CSR campaign. Instead, CVS is demonstrating its ability to lead with bold policies it hopes other brands will adopt. It's not the first time the brand has led the pack: In 2014, CVS became the first national pharmacy to ban the sale of tobacco in its stores.

Here are four ways CVS is blazing a new path forward with its Beauty Mark messaging.

Showing industry thought leadership. Rather than limit the Beauty Mark announcement to a press release and social media posts (the Beauty Mark graphic was posted to the company's Twitter, Facebook and Instagram channels), CVS had its president Helena Foulkes make an official announcement at the National Retail Federation's convention in New York. CVS wants the message to be heard loud and clear among its peers in the retail industry.

Picking a well-trained spokesperson. Foulkes also appeared on CBS News, in which she explained the rationale behind CVS' new initiative, illustrating her media savvy in the process. Opening with a personal anecdote, ("I'm a mother...I look at how my girls consume media,")  Foulkes built her case with supportive data. "Eighty percent of women feel worse about themselves after looking at ads," said Foulkes. She called the impact of beauty advertising a "health issue," arguing women should "not feel like they have to live up to an unrealistic standard."

Playing to its audience base. It should be noted that 80% of CVS' consumers are women, according to USA Today. We can now add CVS to the list of brands taking a stand on the issues that matter most to their customer base. (A few recent examples: Patagonia's statements against environmental deregulation; the open letter from tech brands supporting net neutrality; and 2017 Super Bowl ads that spoke out against Trump-era immigration policy.)

Great timing. Women's voices in the media are louder than ever in 2018, with the #MeToo movement showing no signs of slowing down. With so many luminaries, brands and media outlets calling for an end to workplace harassment and the gender pay gap, there's no better time for brands like CVS to take a stand against advertising that negatively impacts women.