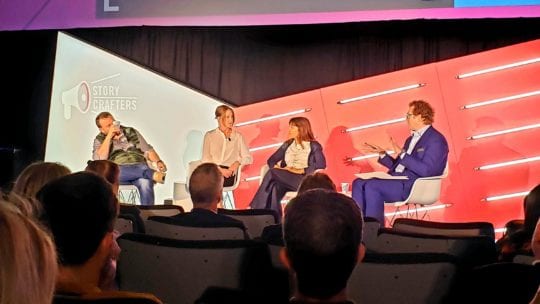 While some brands stay laser-focused on wooing the millennial demographic, the brands staying ahead of the game are keeping one eye to emerging generations Z and Alpha.

As part of Advertising Week New York on Sept. 26, a panel that included Anna Bassi of The Week Junior, Dylan Collins, chief executive officer of SuperAwesome (the company leading the charge to make the internet safer for kids) and Dr. Alda Uhls, founder and executive director of the UCLA Center for Scholars & Storytellers, discussed the differences in generations and the importance of messaging.

The oldest of the millennial generation turn 38 this year, well into adulthood over their generation Z counterparts, the eldest of whom turn 22 this year. Generation Alpha, now a part of some millennial and generation X households, includes all children under the age of 10. (Yes, those under 10 are already a large marketing demographic.)

There are stark differences in the creation and consumption of content for millennials versus generations Z and Alpha. The panel agreed that while millennials tend to be more focused on the self and image, generation Z and Alpha gravitate to global communities and fixing the problems brought on by previous generations.

"They feel they have an investment in our future," Bassi said. "They know what is going on in the world, they are not prepared to sit back and let it happen. They are no longer passive recipients of information. They will not be pacified by an adult telling them it’s going to be ok."

After technology companies have repeatedly erred in terms of transparency and digital privacy, these younger generations will be the first to be protected by privacy laws. They will know what privacy consists of and where their data is going. This will pose a challenge for companies known for making a profit from farming customer data.

"Every single person in this room grew up in this generation with a giant footprint of digital information," Collins said. "Now kids can be given complete anonymity from a tracking perspective. Governments around the world are passing laws to undermine data-driven business models. For the first time in history we are seeing laws being put in place to protect children and their usage of social media services; not just digital privacy, but how these platforms are used and moderated."

Collins acknowledged the new digital ecosystem for kids should include "zero data."

"It's about contextual and engagement and having to create an environment for kids they care about content, rather than hitting them with ads," he said. "Wait until they learn what the tech companies have been doing with their personal data since they have been born. They are the most empowered and informed generation we’ve ever seen. Now they have the tools to do something about it."

Speaking at U.N. Week in New York City, sixteen-year old Greta Thunberg made viral waves, showing that her generation intends to make a real difference—and that people are paying attention. Children of generations Z and Alpha had already learned about Greta, of course, through their constant interaction with global digital communities.

Younger generations grew up with digital media in their hands. They utilize digital for daily consumption, but also take it into the real world. They can look up how to build a treehouse on YouTube without instruction from their parents.

"In the ‘old days’  there were only so many places to get information," said Dr. Uhls. "Nick Jr., Disney Channel. Now kids can post their own content on the Internet, where other kids are also watching and responding."

This connectivity allows for children to be more invested in social issues at an earlier age.

"Kids are interested in social impact, news, and they are very open," Dr. Uhls said. "YouTube changed everything. They are less commercial, and understand individual actions can lead to collective change."

Bassi agreed, noting growing readership of The Week Junior Magazine, and how building a following, such as Greta did on social media, can make a difference.

"Younger generations share common interests all over the world due to digital media," she said. "They have a strong sense of themselves, but also how collective power works...I think they are going to change the world."