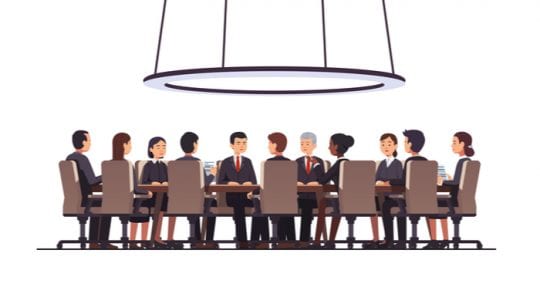 There are many aphorisms about being out of touch besides “Ignorance is bliss.” Acknowledging that leaders have blind spots, a wise CEO said something years ago that’s perfect for January 2022 thus far: There’s a lot of ignorance at the top.

And, of course, there's Vishal Garg, the Better.com CEO, who coldly fired 900 employees during a webinar on Zoom early last month. Later, he blasted some of those employees in social posts.

Yet, just 19 days into January and the number of PR crises involving CEOs and boards threatens to make 2021's total seem paltry. Indeed, yesterday (Jan. 18) Mr. Garg returned from a board-imposed "break." And, unlike the 900 fired employees, he still has his job. Mostly in jest, Paine says, "It could be that good, ethical and transparent replacement-CEOs are hard to find these days."

In a way, ignorance at the top is explainable. Almost. In many cases, CEOs and boards lead insulated lives. It's the rare leader who makes time to interact with rank-and-file employees, aside from episodes of “Undercover Boss." The CEO and boards are too busy, right or wrong.

Yet as 2022's earliest CEO-and-board-related PR crises prove, ignorance is not bliss. Best to have a crisis PR pro providing a dose of unvarnished reality to the C-suite and board.

Of course, sometimes leaders and boards ignore their crisis experts. Other times, a leader acts alone, without board knowledge.

'Lonely' at the Top

An example of the latter is a PR crisis that the MLK Jr. weekend and a winter storm obscured from significant national coverage and ignominy. The leader in this case holds an M.D. and PhD. So, we can rule out stupidity, but maybe not ignorance.

Schlissel is far from the first leader to do this and get caught. The incredibly out-of-touch element here is that Schlissel essentially documented the situation in a series of emails using his university account.

"Clearly, he lived in an ivory tower, secure from the university's enormous PR team," Paine says.

A Man of Letters

And in a tremendous example of transparency, or revenge, the college's board of regents posted some 110 of Schlissel's emails on its site for public consumption. Sorry, they're not very interesting or amorous.

"This is a perfect example of someone with too much power and who regularly holds others accountable, yet believes he is above rules, ethics and professional behavior," says Dr. Kerry O'Grady, faculty director and associate professor of practice at Georgetown University's master's program in PR and corporate communications in the School of Continuing Studies.

"So many at the top," she adds, "feel like they are untouchable because of a title." They believe they'll never get caught or should not be held to the same standard as others, she says. "They feel they deserve certain graces."

The U of Michigan situation sounds like a culture problem, Paine adds. "The president thinks sexting...is acceptable and the [former football] coach thinks it's okay for a doctor to prey on students and student-athletes."

Paine was referring to the late Dr. Robert Anderson, a longtime university physician (1966-2003), who allegedly sexually abused some 1,000 students and student-athletes. The late Bo Schembechler, Michigan's legendary football coach (1969-1989), apparently knew of the abuse, from his son.

Another example of a 2022 PR crisis and ignorance at the top is France's education minister Jean-Michel Blanquer. Monsieur Blanquer announced stricter COVID regulations for French schoolchildren Jan. 2. So far, so good, right? Well, not really.

It emerged later that Blanquer was vacationing on the island of Ibiza when he made the announcement. In a picture accompanying an article about the COVID regulations, Blanquer is shown sitting at his office desk.

French rules did not prohibit his trip to the party island, yet the optics made Blanquer seem, as one media headline put it, "out of touch."

Blanquer’s attempt at explaining himself was yet another priceless example of ignorance at the top. Or, arrogance. Yesterday (Jan. 18) he admitted the optics of a trip to Ibiza were bad given the circumstances. (Good. Own the error.) Still, Ibiza in “the winter," he said, "is not [at] all like [it is] in summer.” (Ouch.)

Again, it's not the first time a leader was in the wrong place at the wrong time.

And it isn’t even the first time that a leader abused a situation during COVID. [See Johnson, Boris: party animal. Incidentally, some say Johnson's move today (Jan. 19), suspending certain COVID safety measures, has little to do with science and is more about rescuing his job.]

On a more pleasant note, Blanquer and Johnson prove that U.S.-based leaders have no monopoly on ignorance.

More proof of this lack of monopoly comes courtesy of now-former Credit Suisse chair António Horta-Osório. In another PR crisis the long weekend obscured, in the U.S. at least, Horta-Osório resigned Jan. 17.

His end began when media reported he’d ignored Switzerland’s quarantine rules after a trip to Portugal, late in 2021. Initially, he tried to cover up his gaffe, not unlike Wimbledon 2021 mens champ Novak Djokovic.

And speaking of tennis, the sport helped seal Horta-Osório’s fate. After reports of the Portugal trip, media found Horta-Osório flouted quarantine rules once before. He traveled to London last summer to attend, wait for it, Wimbledon.

Adding a cherry on top is that Credit Suisse hired Horta-Osório to impose discipline and rules on the scandal-plagued bank. The Swiss press had a field day blasting a rule keeper unable to follow rules.

Adds O'Grady, "Leaders need to set the example they want others to follow. Otherwise, their credibility and reputation are shot."

Ignorance at the Top, the Board Game

Boards also offer examples of ignorance at the top. Look at the board of Better.com, which re-instated the earlier-mentioned Garg after he authored one of 2021’s prime examples of CEO misbehavior.

The board, probably thinking it was being transparent, shared a Jan. 18, 2022, memo about Garg with the New York Times. At least in the Times' story there’s no mention of an apology to employees past or present.

Instead, the mortgage company's board expresses confidence that Garg is a changed man. Its letter says in part: We are confident in Vishal and in the changes he is committed to making to provide the type of leadership, focus and vision that Better needs at this pivotal time.

'No Story Here, All is Well'

This benign letter says Garg worked with an executive coach during his board-imposed “break” from CEO duties. In addition, it notes Garg’s return followed an independent review of company culture.

(Can you imagine what that review found? A hint. The letter says Better.com will hire a new board chair, president and chief HR officer. It's a tacit admission the previous crew enabled Garg to run amok. Presumably this new group will keep a closer eye on him. Or try.)

In addition, Better.com will establish “a respectful workplace” training program and an ethics and compliance committee, reporting to the board, the Times says.

Is the board ignorant enough to think Garg will change and that the slate is clean? Probably not.

Moreover, this board and its CEO are prime examples of how to run a business without empathy.

"Revenue is king. That's the driving force behind the decision not to fire Garg," O'Grady says. "No amount of training or board supervision is going to erase the December event from anyone's minds," she adds.

In addition, Garg is a "constant reminder" of the mass firings. "This will impact how stakeholders view the company for years to come," she predicts.

The only way to show Garg's behavior was unacceptable "is to remove him...then, and only then, is it appropriate to institute training programs, demonstrating continuous improvement and organizational growth."