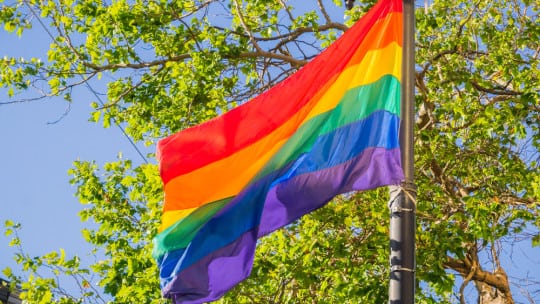 June is Pride month, in which members of the LGBTQ community worldwide celebrate their identity and their right to live their life openly and love whom they choose. And though we still have a long way to go in the acceptance of LGBTQ people (as evidenced by Elton John’s recent call to boycott social media platforms over their lack of action against homophobic hate speech), a 2018 global survey by the Williams Institute reported that since 1981, almost 57% of countries have experienced an increase in acceptance of the LGBTQ community.

With the increase in social acceptance, more and more brands are throwing their support behind LGBTQ causes, not just through verbal support but through monetary donations as well.

Here are three brands that are conspicuously doing good for Pride:

At the 2018 WangoTango event—an annual concert hosted by Los Angeles’ KIIS FM radio station and sponsored by AT&T—on June 2, AT&T announced its partnership with the Trevor Project, a crisis counseling service for LGBTQ youth, for their #TurnUpTheLove campaign. As part of the campaign, AT&T pledged a $1 million donation to the Trevor Project, as well as providing “more than $675,000 worth of AT&T products and services as well as technology & connectivity expertise,” according to a press release.

AT&T has been a longtime supporter of the LGBTQ community, and this recent donation will help to “modernize and transform The Trevor Project’s proven suicide prevention capabilities and help them serve four times as many LGBTQ youth via their digital platforms as previously possible.”

The online gaming community is not typically known for the being the most inclusive place, but gaming platform Twitch is seeking to change that with its #TwitchUnity campaign. The extensive campaign seeks to raise money for community causes as well as highlighting members of the LGBTQ community.

In a June 1 blog post, Twitch explained that it will feature a LGBTQ creator on the front page of the site every day for the month of June. Additionally, the company created “Cheer for Equality” T-shirts that are “designed not just around the rainbow flag, but the bisexual, transgender and lesbian flags as well.” Most importantly, 100% of the proceeds from the sale of the shirts will be donated to the Human Rights Campaign, an organization that fights for LGBTQ rights.

As if that weren’t enough, Twitch is also participating in the San Francisco Pride parade and teamed up with the “It Gets Better” initiative to “empower LDGTQ Twitch staff to share their support and encourage LGBTQ youth all around the world.”

The brand announced on June 5 that it partnered with Miley Cyrus on its 2018 Converse Pride Collection, creating rainbow-themed apparel to be worn for Pride month celebrations. Additionally, the company states that “all net proceeds of the collection will support LGBTQ+ youth community partners globally, including the Happy Hippie Foundation, It Gets Better Project, Minus 18 and RainbowYOUTH.

Converse also created a line of posters using statements submitted from members of the LGBTQ community and their family and friends after the company asked for submissions of a Pride message in five words or less. The posters are available for download on the Converse.com site for use in Pride parades and other celebrations.