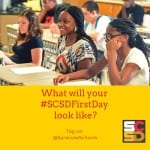 The Syracuse City School District (SCSD) is comprised of 30+ schools, 21,000+ students and 3,000+ staff. Like many large urban districts, it struggles with a conundrum: The mainstream media jumps to cover the negative news coming out of its schools, yet the district struggles to gain coverage for the good.

Last fall, as back-to-school season got into full swing, the district decided to create a one-day campaign on social media. The goal was to start the year on a good note, flood social media with good news about the SCSD and to encourage students, parents and staff to interact with the district online.

Beginning in early August, the district created a series of graphics asking students, staff and families to share photos of their first day experience on Twitter, using the hashtag #SCSDFirstDay.

These images were shared with district staff several times throughout the month of August and leading up to the first day of school. The district posted these images on Twitter regularly, in addition to creating a custom Twitter header with the #SCSDFirstDay call to action.

To engage its existing Twitter followers with the campaign, beginning two weeks in advance of the first day, the school district individually tweeted its Twitter-active staff calling on them to share their #SCSDFirstDay memories and to encourage colleagues to do so as well.

The #SCSDFirstDay campaign was an overwhelming success. Throughout the first day, the district constantly retweeted, responded to and liked submitted photos and tweets. There were posts from students, parents, staff, administrators—even community organizations like the local library system and the Mayor of Syracuse.

The district’s Facebook page saw a 95% increase in total page views compared to the week before school started, as well as a 205% increase in likes.