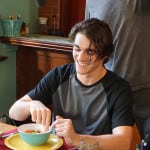 Located in Kansas City, Mo., with offices in New York and Washington D.C., the National Association of Insurance Commissioners (NAIC) is the U.S. standard-setting and regulatory support organization created and governed by the chief insurance regulators of the 50 states, the District of Columbia and five U.S. territories.

Insure U is the NAIC’s consumer education program executed in partnership with public relations firm FleishmanHillard (FH). In 2015-16, the NAIC focused on millennials due to their perceived invincibility, habits of undervaluing possessions and procrastination.

NAIC leadership selected Breaking Bad star RJ Mitte as a celebrity spokesperson based on his appeal to millennials as well as his numerous “bad breaks” which had not been chronicled in the media. Born with cerebral palsy, Mitte needed to understand his health insurance coverage from a young age. He also had multiple auto accidents and experienced a break-in where many valuable belongings were stolen or damaged. Mitte also spoke to the significance of having important insurance discussions with parents.

Mitte was uniquely positioned to convey the importance of insurance education to millennials through social media, but also through short, shareable videos. NAIC Communications and FH drafted and revised scripts specific to Mitte’s insurance issues with the “RJ’s Bad Breaks” theme.

Mitte has a large social media following and the campaign centers on social media outreach so the videos would be easily shareable via social channels. The team decided to record short videos with some animation that featured Mitte discussing his bad breaks and how insurance helped him bounce back.