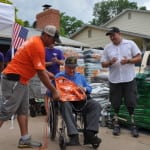 The Home Depot Foundation, the philanthropic arm of the world’s largest home improvement retailer, is focused on improving the homes and lives of U.S. military veterans and their families. Team Depot, the company’s associate-led volunteer force, activates year round, with a concentrated effort during Celebration of Service, a two-month volunteer campaign.

Participants were encouraged to celebrate service in their own communities, and The Home Depot Foundation committed to donating $1, up to $1 million, for each social media action. Actions included sharing a #ServiceSelfie on Twitter or Instagram or liking, commenting or sharing one of nine weekly Team Depot Facebook posts honoring nonprofit partners that serve veterans. The program was promoted through outreach to select media and influencers with mailers, which invited them to be honorary Team Depot members and armed them with Team Depot selfie sticks to share their own #ServiceSelfie.