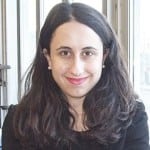 PR News recently asked its community to tell us who should be listed among the top game-changers of PR in the last few years. Here, we look at game-changer Kara Alaimo. For more, check out the complete list of the 50 Game-Changers of PR for 2017.

For Alaimo, PR can and should be used to effect social change, and she has worked tirelessly for this cause throughout her career. As an assistant professor of public relations at Hofstra University, she teaches how to adapt messages and strategies for different cultures­.

Her book, “Pitch, Tweet, or Engage on the Street: How to Practice Global Public Relations and Strategic Communication,” was published to do just that by categorizing the world into 10 cultural clusters and explaining best practices in each of them. Alaimo’s research is now being taught at Columbia University, NYU, George Washington University, the Newhouse School at Syracuse University and many more.

Alaimo’s work has identified the best ways to use PR tools to advance social causes, including examining how Facebook was used in the Egyptian revolution, as well as PR initiatives to fight human trafficking and domestic violence. Alaimo’s impressive writing also includes articles on how to practice culturally sensitive and pro-social PR published by The New York Times, The Washington Post, Harvard Business Review, The Atlantic, CNN, Bloomberg, Al Jazeera and top academic journals of communications.

Her expertise has led to some high-profile political appointments. From 2012-2013, Alaimo served as head of communications for the United Nations Secretary-General’s High Level Panel on the Post-2015 Development Agenda. In 2011, she was appointed by President Obama as spokesperson for international affairs in the U.S. Treasury Department. In this capacity, she also served as media adviser to Jim Yong Kim during his successful 2012 campaign for the World Bank presidency.

Most Interesting Fact Not Found on Kara’s Resume

"I have traveled to about 60 countries on six continents. I'm currently plotting a trip to my last continent: Antarctica."

Kara’s Advice to Her 20-Year-Old Self

"Be curious and go out and find the answers you need. In my positions in the United Nations and Obama administration, I was always searching for a guide that would teach me how to adapt PR strategies and messages for different countries and cultures. Finally, I gave up and went out and interviewed senior practitioners in 31 countries and wrote the book myself."

Kara's Profession in an Alternate Universe

"If I weren't a PR professor, I'd want to be a full-time writer. I'm a voracious reader and read a novel almost every week. Over the past year, I've started writing columns about PR for outlets like The New York Times, The Washington Post, Harvard Business Review, CNN and Bloomberg. It's a lot of fun and it also keeps me on top of the latest developments in our field, from how to prepare for fake news and Trump Twitter attacks to how to respond to this new wave of employee and endorser attacks that organizations have been experiencing. I just love it."