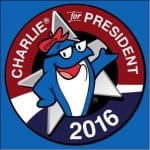 Though Charlie the Tuna was already famous, Gatesman saw an opportunity to boost his reputation and the StarKist brand even more with the 2016 election.

StarKist had a strong social media following, but the company wanted to expand its audience and increase its engagement. Gatesman saw the election as an opportunity to insert Charlie the Tuna into a conversation that would be prevalent in every household (and dinner table) across the United States for several months.

The Gatesman team implemented the campaign primarily through social media, focusing on Facebook. Facebook provided a space in which Gatesman could easily interact with StarKist’s followers through commenting sections as well as private messaging.

The Gatesman team announced Charlie as the “alTUNAtive” presidential candidate with a complete social takeover on Sept. 7, 2016. StarKist’s Facebook, Twitter and Instagram were covered with #Charlie4prez content, including the cover photos and profile images. The campaign slogan—“I’m not sorry! I’m voting Charlie”—played on the famous “Sorry Charlie!” catchphrase from commercials dating back to the 1960s.

The campaign announcement linked to a microsite that included a press release explaining Charlie’s presidential bid, downloadable images and content that was posted on StarKist’s social media channels. This microsite became a convenient all-encompassing hub of information, especially for the media.

Throughout the first few weeks of the campaign, Gatesman shared infographics explaining why Charlie made for the perfect alTUNAtive candidate. The agency also created social “attack” advertisements for Facebook, Twitter and Instagram in which Charlie playfully criticized other forms of protein like pork and chicken. The social channels also featured “Forrest Gump"-esque images showing Charlie in historical photos with past presidents like Lyndon B. Johnson and Richard Nixon.

On Nov. 23, 2016, #Charlie4prez wrapped up with a concession speech. The campaign’s results far exceeded Gatesman’s objectives and expectations. On Facebook, #Charlie4prez resulted in nearly 3,400 new followers on StarKist’s Facebook page and more than 3.7 million total impressions—both paid and organic. Gatesman both successfully boosted awareness and drove engagement with nearly 60,000 engaged daily users throughout the campaign.