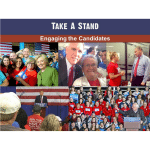 Take A Stand was a nationwide nonpartisan campaign to raise the profile of Social Security in the 2016 presidential election. Its goal was to create an environment where the next Congress and President could engage in a serious effort to create a solution that will strengthen Social Security beyond 2034.

Bringing the future of Social Security to the forefront required an innovative grassroots and engagement model. To achieve this, AARP launched a comprehensive campaign on Facebook, working hand-in-hand with grassroots advocates to elevate the issue and engage everyday people across the country.

Specifically, this campaign used Facebook to press the candidates to lay out their plans and give Americans specifics about their plans, pressured the media to ask candidates about Social Security and educated the public about this issue.

Through these efforts, every major presidential candidate offered plans to strengthen Social Security, candidates called out Take A Stand volunteers during their primary events, Hillary Clinton spoke about Social Security during her convention speech and candidates provided answers to AARP Bulletin interview questions.

In all, AARP’s efforts resulted in 20.2 million engagements and 95.9 million impressions.