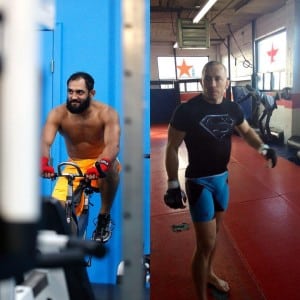 The objectives of this campaign were to build buzz and awareness for the UFC 167: St. Pierre vs. Hendricks Pay-Per-View event. Johny Hendricks had been on an impressive winning streak and Hendricks’ confidence was getting to the champion’s head. The goal was to get the fans engaged and talking about this fight and the potential to dethrone a 6-year reigning champion.

The strategy involved using an engaging photo that shows both Hendricks’ confidence and St. Pierre's focus. Copy was used that posed the question to fans: Can Hendricks dethrone the champion? UFC fans are very vocal and opinionated and UFC wanted them to chime in with their fight predictions.

The campaign was launched within 48 hours of the UFC 167 live event; UFC alternated creative and copy to ensure that they were receiving the highest engagement rate and lowest possible CTR and CPC.