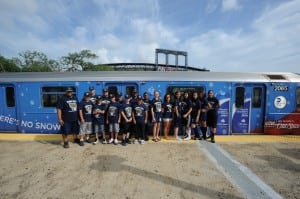 With the “Season of the #Whiff” campaign, Marina Maher Communications intrinsically linked Head & Shoulders to baseball, further solidifying the brand’s partnership with Major League Baseball and contributing to sales 20% above the brand’s original forecast.

Starting on Opening Day 2013, for every “whiff” (strikeout) across MLB during the 2013 regular season, Head & Shoulders made a $1 donation to the MLB Reviving Baseball in Inner cities (RBI) program. Fans got involved by tweeting whiffs throughout the season via #Whiff along with their favorite team’s Twitter handle to rack up donations and also have the chance to win cool MLB prizes.

All 30 MLB clubs across the country participated in the campaign, and there were more than 1 billion Twitter impressions for the #whiff hashtag. On August 28 and 29, 2013 #Whiff was the #1 trending hashtag in the US.

Additional campaign results included the #Whiff hashtag receiving over 2,690,751 tweets and 212,956 contributors; a 489% increase in @HSforMen Twitter page followers throughout the entire campaign; and a 73.2 #whiff ratio, meaning for every strikeout, there were 25.1 #whiff tweets on average