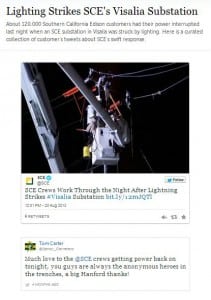 When the power is out, Southern California Edison’s (SCE) customers can’t turn on the TV. They may not be able to access their computers. But they can get on their smart phones … and they do.

The company realized this in December 2011 when a devastating wind storm crippled parts of SCE’s service territory. Some customers were without power for up to a week, and the then-fledgling SCE Social Media team, which consisted of about half of an FTE, for the first time saw the value of social as a critical communications tool in a crisis.

As a result, SCE sought to invest in Social Media and in 2012 this objective was met by SCE as it added a full-time Social Media manager and community manager. Armed with these new resources, in 2013 SCE initiated a robust social media initiative around crisis outage communications.

The initiative was put to the test on the night of Aug. 19, 2013, when lightning struck a critical piece of infrastructure (a substation), causing a large fire in the structure and more than 100,000 customers in Tulare County were left in the dark. SCE social media responded and a steady stream of tweets by @SCE that focused on the crews working feverishly to restore power helped turn the frustration from customers into a groundswell of support -- and appreciation -- for SCE crews.

After initial acknowledgement of the issue, SCE posted a tweet with an estimated time of restoration (for most customers) and that tweet receieved 207 RTs -- the most RTs of any @SCE tweet since its launch on Sept. 15, 2008 -- and 27 favorites. According to PublicRelay, which measured sentiment around the outage, the tone in social media was 94% either positive or very positive.