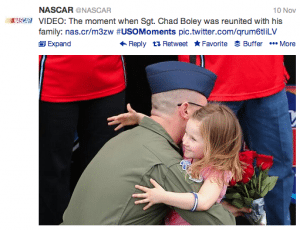 The USO launched a massive brand campaign on Veterans Day 2013 dubbed “Every Moment Counts.” The goal was to raise awareness of the general American public to the everyday moments often taken for granted that our military families sacrifice.

On Twitter, the USO wanted to break through the noise to reach and engage a huge audience with the hashtag #USOmoments. The USO wanted its supporters to communicate what lifetime moments, big or small, were given back to the troops through the USO.

By developing a hashtag, #USOmoments, USO spread its messaging on Twitter, riding on Veterans Day steam, in a branded and cohesive manner. The USO made sure their highly engaged online community could participate by developing a Facebook tab for the Every Moment Counts campaign. Working with Postano, a social content aggregator, the tab encouraged people to use the hashtag to share their own #USOmoments. Pulling from Twitter, Google+, Instagram, and Pinterest, updates were then published and shared on the USO Facebook page.

In the end, the hashtag and messaging reached an estimated 43 million people on Twitter over the Veterans Day weekend, the main USO account received more than 1,000 new followers in three days, and Twitter was the highest driver to the campaign microsite, USOmoments.org.