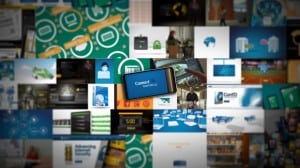 Symantec approached Connect Marketing about creating a B2B social media campaign that would give customers access to content and information presented at the 2013 Symantec Vision annual company conference in Las Vegas and extend the life of this content – which represented a significant investment for the company – to those who were unable to attend due to travel restriction or budget.

The team knew that they needed to give users a feeling of being at the user’s conference even after the annual event concluded and share information about products, technologies and other initiatives shared during various panels and breakout sessions. This meant they needed a platform where customers who couldn’t attend the conference could receive the information presented in a personal and real-time manner where they could interact with subject matter experts.

Google+ Hangouts On Air were determined to be the most effective platform to give B2B customers the look and feel of what they would have experienced at the conference. The informal engagement model of Hangouts allowed users to attend the sessions without having to preregister or watch another webinar where there would be little interaction. Hangouts On Air also proved to be effective with the subject matter experts who were based in locations all over the world.

The Hangout On Air series started June 12, 2013 and ran through September 18, 2013; in addition to promoting to users, Connect Marketing was responsible for coordinating with the panel and producing the Hangouts each week. For each Hangout, there were two producers, one moderator, and a panel of experts, generally two to three product experts from Symantec.

In the campaign’s roughly four months, there were an estimated 12.5 million impressions about the events, according to Sysomos. In addition, there were 17,026 total social media interactions, which include video views, clicks to resources, likes, shares, retweets and comments across social platforms including LinkedIn, Facebook, Twitter, SlideShare, Google+, YouTube and Symantec Connect. The average impressions per hangout were 892,499, while the median social media interactions totaled 1,170. During the campaign the official Symantec Google+ page grew about 60% a