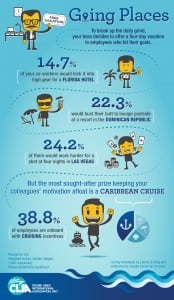 Infographics were created for the Cruise Forward campaign. Cruise Forward hosted CLIA’s launch of the Passenger Bill of Rights, which was a significant step in defining rights onboard cruise ships and clearly stating member lines’ commitment to passengers. The graphic provides a visual depiction of the 10 rights set in the bill and was extremely helpful in fully informing consumers on their guaranteed rights when on cruises.

Additionally, to promote the findings of the U.S. and European Economic Impact Studies, an infographic was created to highlight the industry’s expansive economic contributions to port and inland communities. The graphic portrays industry growth over time, key economic statistics and a breakdown of economic data by top states.

Prior to the official launch of the Cruise Forward campaign, APCO also helped CLIA begin its foray into the visual depiction of content with the “Going Places” infographic. This graphic shows the cross-industry collaboration, highlighting data produced by a travel agent firm to promote positive perceptions of the cruise industry. 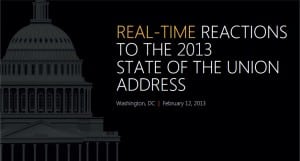 In order to measure user sentiment and highlight user reactions during the 2013 State of the Union address, Bing teamed up with Proof Integrated Communications and created Bing Pulse, Bing Beat, and Bing Stats.

Bing Pulse was a polling platform that encouraged people to vote every five seconds on their reactions to the President’s speech, Bing Beat was the “social sentiment tracker” that would track keywords on social media platforms pertaining to the address as well as the sentiments of the social media posts, and Bing Stats was used to analyze the key words and topics from the President’s speech.

To ensure that the infographic was easy to understand and most clearly showcased their data, the team chose to divide the infographic into three sections, with the results from Bing Pulse, Bing Beat, and Bing Stats each having separate graphs representing their individual data.

With almost 13 million votes and 1.3 million site visits, Bing’s State of the Union campaign was extremely successful and was marked as the largest live online poll in history. The infographic was picked up by multiple political, news and tech sites and blogs and featured on multiple news broadcasts and videos.