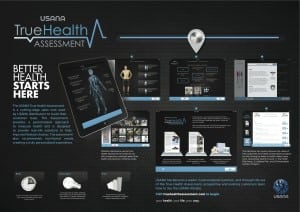 A main objective of USANA Health Sciences’ True Health Assessment app is to assess a person’s current lifestyle and offer suggestions to help them improve their overall health, based off of their responses.

USANA’s strategy included building awareness of the app through traditional communications to USANA-affiliates, such as e-mails, videos and blogs, to educate them with the best ways of using the program within their business; and to expand their reach among non-USANA-affiliates on international scale and introduce them to USANA’s products.

Since it was launched in November 2012, more than 55,328 unique visitors have used the app, and since the app was translated in February 2013, there have been more than 2,080 direct enrollments and 6,897 influenced enrollments.

During the four-week promotion USANA saw multiple and significant spikes in its total sales with direct enrollments increasing 42 percent, retention increasing from 30.7 percent to 77.4 percent and new spending habits increasing 9.6 percent. Overall, the promotion reported more than an 80 percent ROI.