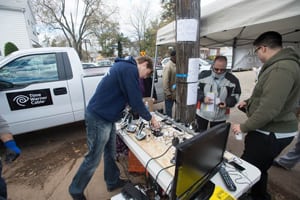 Superstorm Sandy, the largest Atlantic tropical system on record, proved to be the most destructive storm in U.S. history when it struck in 2012, causing nearly $75 billion in damage and killing 285 people in seven countries. Time Warner Cable (TWC) is the largest cable, Internet, and phone provider in New York City and much of the Eastern seaboard, with physical plant underground and overhead from North Carolina to Maine.

No one anticipated the resulting impact of the storm; in all, nearly 300,000 TWC customer accounts were out of service. In addition, TWC operations were flooded, equipment was damaged, vehicles lost, and fuel was scarce. Employees were directly affected; the operational challenges were enormous. For the company and its one million customers in the hardest-hit areas in the Greater New York-New Jersey Metropolitan area, the storm posed tremendous challenges. It also provided an opportunity to demonstrate TWC’s mission and values in action during a crisis.

As part of Time Warner’s efforts, Twitter and Facebook were utilized to build awareness and be transparent about what was happening, as well as to actively listen to feedback and resolve issues.

Food trucks were deployed to serve 30,000 meals in severely affected areas, as residents worked to restore their homes. Twitter and Facebook were important tools in getting the message and the location of the trucks out to those in need. With no power at home, TWC’S payment centers became customers’ living rooms—and they came for pizza and to watch the New York Giants game, for example. In addition, TWC representatives made house-to-house visits to check on the well-being of residents, gather damaged equipment and assure customers they would not incur charges.