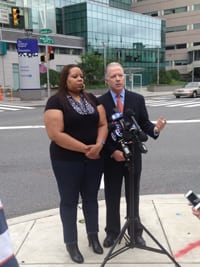 Without a desperately-needed lung transplant, 10-year-old Sarah Murnaghan, a cystic fibrosis patient who was in critical condition with failing lungs, was going to die.

But because of the “under 12” rule, organ transplant teams were prohibited from offering her a set of adult lungs until they had been declined by every single adult on the transplant list. Waiting for a set of rarely available child donor lungs offered no additional hope. The only way to help young Sarah secure a set of donor lungs would be to effect a change in the policy.

After Secretary of Health and Human Services Kathleen Sebelius refused to consider such a change, Sarah’s family called on Pepper Hamilton LLP litigator Steve Harvey and his team of attorneys to legally pursue a change in policy. Pepper Hamilton, a client of Buchanan Public Relations, took the case pro bono.

Harvey and his team immediately filed an emergency petition, and on June 5, 2013, a federal judge issued a temporary 10-day restraining order (TRO) to prevent Sebelius from enforcing the rule. Sarah could now be considered for receipt of adult donor lungs based on the severity of her condition, not her age, in the Organ Procurement and Transplantation Network (OPTN) system.

Immediately following the judge’s temporary ruling, the case of Javier Acosta, a child in the same hospital under the same circumstances – diagnosed with cystic fibrosis, under the age of 12, and in need of a lung transplant – also came to Pepper’s attention. The very next day, Harvey and his team filed and were granted the same TRO that Sarah Murnaghan had received.

After conducting a comprehensive situational analysis, monitoring the news coverage to date and meeting with the Pepper Hamilton legal team to ensure full understanding of the case, Buchanan PR successfully secured a bevy of media coverage—including print and online—to educate the general public on the little-known ”Under 12” Rule.

After positioning Mr. Harvey as the legal expert and garnering national attention – not just for Sarah and Javier, but for a little-known law in U.S. organ transplants – the OPTN held an emergency meeting and instituted a new process to protect children like Sarah and Javier, ultimately resulting in Sarah’s lung transplants. Javier continues to wait for a transplant, but he is now permitted to be considered for a suitable set of adult donor lungs.