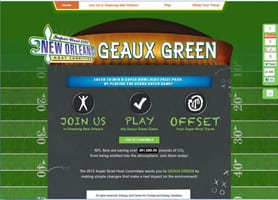 As the environmental sponsor of Super Bowl XLVII in Feb. 2013, Entergy Corporation led the efforts of a community coalition to plan and host the greenest Super Bowl in the NFL history.

But the coalition also realized an unprecedented opportunity to leverage America’s most viewed television event as a platform to create awareness of climate change and the collective impact that individuals can have through their actions. Super Bowl XLVII marked the first time that the host city expanded the reach of its environmental activities beyond the market area of the home franchise.

As part of Entergy’s efforts, environmentally-conscious fans were offered the opportunity to use a free calculator to tabulate emissions generated from their travel and purchase carbon credits to offset them. Offsets could be purchased for $5-15. Entergy provided a 1-to-1 match for the offsets purchased.