Winner: Office Depot Foundation – Be The Difference. Speak Up Against Bullying! 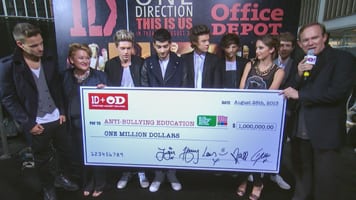 The critical need for the program is clearly evident. Research shows that an increasing number of fourth through eighth graders report being victims of bullying. An estimated 160,000 students skip school every day to avoid being bullied, while 40% of middle schoolers believe that violence is increasing at their schools - and they don't feel safe.

The "Be The Difference. Speak Up Against Bullying!" Program is promoted on an ongoing basis by Office Depot through its social media channels, as well as by the Office Depot Foundation through Facebook, Twitter and Instagram. The Foundation created a dedicated page on its website to house information about the program, anti-bullying tips for students and parents, and a video introducing Brooks Gibbs as the speaker for middle schools. The entire program is being supported by a national PR campaign managed by JKG Group.