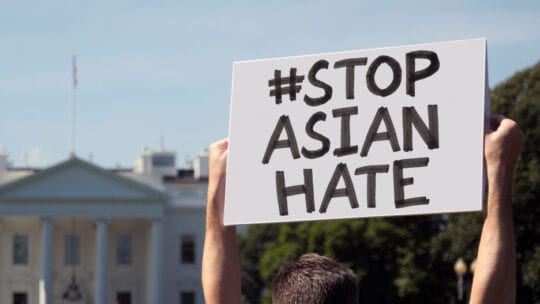 Born and raised in the United States, Binna Kim grew up viewed as a foreigner. For years Kim couldn't avoid the awkward questions and underlying that comes from being an Asian-American woman.

“People often asked me where I was from, what type of accent I had, why my English was so good,” Kim said. “Because Asian women are sexualized—historically portrayed in film and television as quiet, meek women or dominatrixes—I’ve been told, even at networking events, how 'sexy Asian women are.'”

A year ago, when the pandemic hit, and phrases such as “China virus” and “kung flu” became  mainstream, Kim, now president at Vested and a decorated PR leader, noticed an increase in Asian racism.

“My friends began to encounter more hate speech at grocery stores and playgrounds,” she said. “People telling us to 'Take the virus back to where you come from.'" Today, Kim said she's "both energized that the community is finally waking up to anti-Asian sentiment and also saddened that it’s taken this long for this to happen.”

An explosion of support for the AAPI (Asian Americans and Pacific Islanders) community surfaced this past week after a 21-year-old white, male suspect took eight lives during the Atlanta massage parlor shootings March 16. This was not the first attack against the Asian community in 2021, but they  prompted many to consider what fuels this rage.

PR and communication professionals are searching for ways to support the AAPI community. The response of brands and organizations can influence the national conversation.

When national tragedies happen, some communicators seek guidelines from professional organizations. PR Council, PRSA, ColorComm and others have taken to social media, as well as emailed members,  providing messages of support and action items.

“The best way to fight racism and hate is solidarity. Be an ally. Be supportive. Be there for one-another and speak up when you see something wrong. It’s not the time to stay by the sidelines because you think someone else may do it or because you think it doesn’t affect you. It does. It affects all of us.”

ColorComm provided an action-based statement, which not only included historic context about the past year of hate crimes, but offered guidance on refraining from using phrases like “Chinese virus” in communication. In addition, it urged members learn more about identity concepts and advocated for bystander intervention training.

After the Atlanta shootings, Kim was surprised that few media outlets reported the victims were predominantly Asians. In contrast, communicators, she said, have an opportunity to provide reporters with information that bridges the coverage gap.

“Acts of anti-Asian violence have not been as widely reported or covered in the media,” she said. “As communicators, we have a responsibility to listen, to become aware of the issues, and to be mindful and action-oriented on behalf of the companies we represent. One example...is an informational video on how to properly pronounce the Atlanta shooting victims’ names.”

Mitali Das, an account supervisor at BCW and co-founder of Asian-C, BCW’s Asian American ERG, said, “In the face of racial injustice, the PR and communication industry has an important role to play in shaping public conversation, battling misinformation and amplifying minority voices.”

Das added, “Many of us have turned to the news outlets we trust, the brands we support and the leaders we believe in to help make sense of our pain and understand how best to move forward. We must listen and learn from our AAPI colleagues and allow their voices and experiences to shape our path.”

Another suggestion includes treating these incidents as a crisis and prepare in advance.

“Unfortunately, the racially-motivated attacks we have seen over the past year against the Black, AAPI, Latinx and other communities will not be the last,” Das said. “Therefore, PR and communication professionals should also begin to formalize an approach to racial injustice communication, incorporating the best practices learned from the events of the past year.”

It takes time to formulate a considerate, authentic response for public-facing brands and organizations. First, evaluate whether your company belongs in the conversation. Stakeholders expect meaningful commitments from brands, but credibility is key.

Before speaking out, brands must ensure they have the authority to comment. They should vet their internal practices and ask simple questions, Das said.

"If such answers are hard to find, a brand should reassess internally before speaking out on AAPI issues externally,” Das added.

Timothy Chun, social media director at BerlinRosen, agrees that a perceptive audience will sniff out inauthenticity.

“Whether you’re brand-side or a PR comms/social media consultant, it’s key that you educate yourself on the current climate before putting out a statement because people can see right through performative activism,” Chun said.

Another tip: avoid the hashtag #AsianLivesMatter, "because it is co-opting the Black Lives Matter movement,” Chun said. “It is important that we do not erase or forget Black oppression in this conversation, which is why #StopAsianHate should be used.”

While posting a statement of support is a start, what the AAPI community, and most stakeholders, want most is action. This can take the form of education, philanthropy, volunteering or even internal communication.

“There are tons of great resources out there, especially on social media," Chun said. He recommends following Next Shark, Amanda Nguyễn and Dion Lim on Instagram. “The media and communication community can also amplify AAPI voices through the various channels that you lead, whether it’s supporting an AAPI influencer or tapping to an AAPI-led brand or organization for a partnership.”

In addition, Chun said it's important for brands, agencies and organizations to broadcast sources of action to support AAPI.

“The feeling of being unsafe is high amongst the AAPI community, so it’s key for brands to showcase ways they are supporting these issues,” he said. “Support can take the form of charitable donations...hosting a panel discussion with AAPI leaders, investing more toward a campaign that amplifies AAPI creatives, creating new roles or opportunities for AAPI to be better represented…the list goes on.”

And on a personal level, it’s useful to reach out to your AAPI colleagues. BCW’s ERG, Asian-C, created diversity initiatives allowing Asian employees to have a voice.

“Asian-C hosted a safe room conversation in February to hear from AAPI colleagues and allies and discuss our path forward as a firm,” Das said. “The group also spearheaded an internal Community Action Guide that was distributed to BCW offices globally, outlining employee assistance programs and suggested actions that each of us could take to better support the AAPI community. Asian-C also continues to partner with BCW’s I&D team and various account teams to conduct I&D audits and provide culturally relevant counsel to our clients.”

“There are so many great organizations and movements...working on behalf of social justice, for causes related to Asian immigrants in the US,” she said. “While we have this moment in the headlines can we help support these tireless activists and the meaningful work they are doing? Let’s imbue our words of support with investments of our own time, money and resources.”