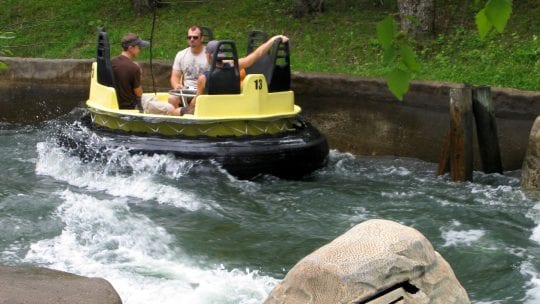 A typical summertime activity, visiting an amusement park, turned tragic at Adventureland Park in Altoona, Iowa. On July 3, an 11-year-old boy, Michael Jaramillo, died after a group tube on the Raging River ride flipped over, trapping him and his family members underneath. His brother, 15-year-old David, remains in a medically-induced coma.

Adventureland Park released a statement July 4 on its Facebook page. The park offered condolences and said it would continue to work with local authorities, while the ride remains closed.

According to ABC News, the park also confirmed a positive inspection of the ride July 2, with no issues reported. However, an attorney for the park jumped in with an additional statement to ABC News on July 5, saying the ride was safe.

"The Raging River ride has been in operation for nearly four decades," the attorney said. "The ride was inspected by the State of Iowa the day before the incident and was in good working order."

Regardless of who or what is to blame, the park finds itself in a tough place. While the remainder of the park, minus the water ride, stays open, guests may find themselves second-guessing the levels of safety on other rides in the park. Many theme park visitors take safety for granted, knowing that inspections must occur on a routine basis for the park to continue operations. Still, recent events can be unsettling. And no attorney can make that safety a reality, no matter what statement is given.

“Amusement park accidents are among the most challenging crises that communicators will ever face because they nearly always involve grieving families and healthy, fun-loving individuals who are killed or injured exactly at a time when they expected to be enjoying their lives,” said Gene Grabowski, partner at kglobal.

Grabowski speaks from experience, after handling two amusement park tragedies in his career. He believes the park responded correctly by quickly shutting down the ride and acknowledging the safety inspections, as well as delivering an empathetic statement in support of the family. However, Grabowski says the park should take care to identify the proper individual to deliver the statements, as well as tone.

“Park owners first must avoid making declarative statements either accepting blame or blaming the victims,” he said. “The park, however, should not have had its attorney speaking for it so soon after the accident because that makes the company appear litigious and defensive. Instead, it would be better that a spokesperson for the park, preferably an individual who is a parent, deliver all statements sympathetically and in person.”

Grabowski says the appropriate time for an attorney to step forward should be “only after a lawsuit is filed or legal action is threatened.” And as far as we know, the family is dealing with a much more urgent crisis at the moment—their son battling for his life. Grabowski said the park could make a personal gesture toward the family, such as a park representative accompanying the family at the hospital, or promising to pay medical expenses resulting from the incident.