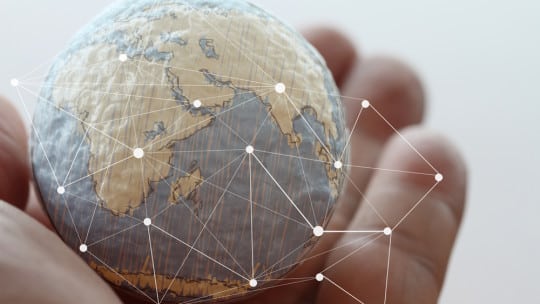 Most PRNEWS stories about reputation and trust concern organizations and companies. Here, though, we look at the reputation of nations and the trust global citizens have in leaders of various countries. Earlier this week, Pew Research Center released a 13-nation survey. It concluded the reputation of the U.S. in some countries is as low as it's been since the venerable pollster began examining this subject. Also low are foreign respondents' views of President Trump. After looking at the survey results, we asked communicators about national reputation and how to create and bolster it.

The U.K. is one of the countries with record low opinions of the U.S. Fewer than half of respondents (41 percent) had a favorable opinion of the former 13 colonies. Just 31 percent of French respondents see the U.S. favorably. That's about the same as French attitudes from March 2003, when the Iraq War was a source of Franco-U.S. discord. Only 26 percent of Germans view the U.S. favorably, nearly matching Germany's 2003 low of 25 percent, Pew said.

Handling of the Virus

Not surprisingly, Pew said Washington's response to the novel coronavirus is responsible for part of the slide in the country's image with overseas respondents. "A median of just 15 percent say the U.S. has done a good job of dealing with the outbreak," the study said. While the perception of China's effort against the pandemic is poorly rated in the survey, Beijing's ministrations top Washington's.

Interestingly, all citizens, except those in the U.S. and U.K., believe their countries have done well battling the virus. The World Health Organization, which President Trump has lambasted periodically, also receives good grades in the survey.

Speaking of the president, he'll not enjoy perusing the survey. Even the leaders of Russia and China, former KGB official Vladimir Putin and the autocratic Xi Jinping, respectively, are more trusted than the U.S. president, the survey showed (see chart below). One of the president's least-favorite leaders, Germany's Angela Merkel, topped the trust portion of the survey at 76 percent. Boris Johnson, the U.K. prime minister and a Trump supporter, has a nearly 50-5o trust-no trust split. 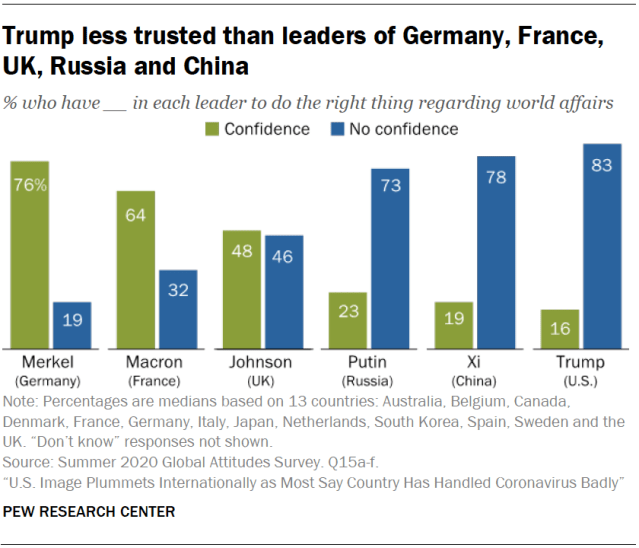 Trump's trust ratings were low throughout his tenure.  This new survey continues the trend. The president's low trust rating is similar to that of George W. Bush toward the end of his presidency. Belgium (9 percent), Denmark and Germany (10 percent each) have the least confidence in Trump. Japan (25 percent) and Australia (23 percent) have the most confidence in the president.

While any survey is subjective, the importance of a nation's external reputation is indisputable. [We'll address reputation building for individual leaders for another essay.] A strong national brand "helps attract tourists, the best skilled labor and talent and foreign direct investment, says Jenny Wang, a VP at kglobal in Washington, D.C.  In addition, it can increase the number of U.S.-made products bought overseas, she said. Factors that influence national reputation, Wang said, include governance, economic fundamentals and the environment.

For Frank Ahrens, principal, BGR PR, also in Washington, external factors, rather than their achievements and characteristics, may define countries—especially middle powers, such as South Korea. Or sometimes it's a dominant characteristic, said Ahrens, who represents the country in the U.S. In South Korea's case, Ahrens said, it too often is thought of as only: a) the land of K-pop and b) the country next to North Korea.

To counter that image, Ahrens made a dive deeply into South Korea's history and heritage in an effort to highlight its character and accomplishments. He then took those highlights and storified them in a short film as part of a consistent narrative in a long-term, multi-channel campaign.

In addition, he said, communicators can tie a country's reputation to favorable current events.

Communicators should work with government officials to anticipate, prepare, and head off reputation issues. Much like having PR inside the C-suite, it is preferable to have dedicated communicators being privy to or having early access to important briefings and information. In addition, communicators should monitor conversations and have a comprehensive early-warning system that tracks press mentions in all regions. In addition, there should be a process for knowing when and how to elevate potential issues.

Again, similar to a commercial brand, a nation's message benefits from being consistent. It’s not a secret, Wang said, that U.S. global messaging has been inconsistent and suffered from not sticking to the script.

"What has been said in international forums has oftentimes run completely counter to America’s traditional ideals and values," Wang said. Mixed messaging leads to uncertainty, which seriously compromises how willing the international community is to align and partner with the U.S.

3. Tout and amplify industry and innovation

Communicators should highlight and amplify top business leaders across sectors to project economic strength and growth. Show that the nation is flourishing, resilient, and on the cutting-edge of innovation, and that others should want to partner with it, buy and learn from it, and even join it.