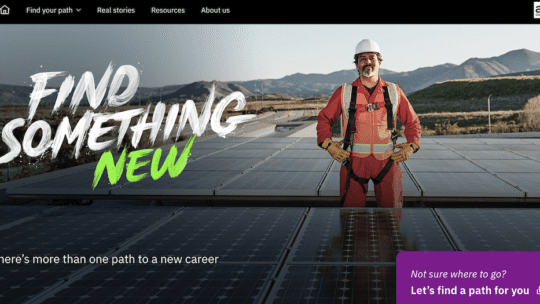 It’s basic PR. The words and visuals used to compose a message sometimes are as important as who delivers it and when. Right or wrong, the president’s daughter, Ivanka Trump, is a human bullseye for critics. To some, the perception of her, again, correct or not, is that she’s a child of privilege who works in the White House only because of nepotism. She seems to absorb hits in the media and on social no matter what she does. This morning, she offered herself as an easy target.

Ms. Trump is part of a just-released ad campaign to bolster employment called "Find Something New." The call-to-action urges the unemployed and those unhappy in their present position to seek something else. It's part of the administration's push to encourage vocational and skills-based occupations.

Jobs are changing — and the Covid-19 has accelerated the pace.

Today we are launching https://t.co/dRZMdZyON4 a website that highlights edu pathways, info about rising careers, a directory of services like childcare, food assistance and Internet access.
https://t.co/PKtGBcSWGc

One of the PR problems here, of course, is that some critics believe Ivanka Trump lacks qualifications to advise people about finding employment. She got her job, this camp argues, because her father is the president. The first daughter, critics say, knows little or nothing about job hunting. To them, Ms. Trump is being cruel.

Oh my god. Fits perfectly with their belief that the real problem is people don’t want to work not that there’s a raging pandemic and massive business closure/job loss!!! https://t.co/ZElfPMe0cS

Ms. Trump is linked to the ad campaign because she co-chairs the American Policy Workforce Advisory Board, which conceived "Find Something New." Secretary of Commerce Wilbur Ross is the board's other co-chair. Ross also is a rich man, though, according to Forbes, not as wealthy as he claims.

The angst over wealthy insiders seemingly lecturing people of ordinary means and the unemployed about finding a job informed New York magazine's headline: "Unemployed Should ‘Find Something New,’ Urge Heirs to Fred Trump’s Fortune." Another standard retort on Twitter today pokes fun at the program's name. Americans will indeed find something new: a new president will be found in November.

In addition, critics charge that the program is insensitive to millions of unemployed Americans. They say the administration's inept response to the pandemic led to much of the unemployment.

Moreover, they argue "Find Something New" makes getting a job seem simple. With the virus leading to global economic uncertainty, Glassdoor says U.S. job listings are down nearly 6 percent.

A web site for the effort offers links to courses, including online offerings, that people can take to help qualify them for jobs. Critics, of course, say it's unlikely that online courses can lead those without a degree to a well-paying job.

If they don’t like bread lines, let them eat cake! Trump White House tells jobless Americans to just “find something new” to earn a living. They have no idea what most people’s lives are like. #TrumpRecession https://t.co/6RrHHxQWWx

Besides reeking of tone deafness, what makes this a story for PRNEWS is that the effort has fancy companies linked to it. IBM and Apple are among the 20 corporations sponsoring the program, media reports say. In addition, the Ad Council and the U.S. Chamber of Commerce are involved.

We trust the companies involved can show they hired or will hire a significant number of people who lack degrees.

Surely communicators at these large companies anticipated the criticism. The poor optics and the country's politically divided mood made it obvious.

It's possible the White House decided to move forward regardless of the fallout. Leadership means making decisions that sometimes are unpopular. On the face of it, a program to encourage people to find employment is a worthy effort. In addition, with millions unemployed, you could argue it's the perfect time to launch such an effort.

Still, from a PR viewpoint, it seems clear that Ms. Trump had a target on her back. Maybe she and the White House felt so strongly that Ms. Trump didn't care about taking criticism. In addition, she may have felt the heat would dissipate quickly.