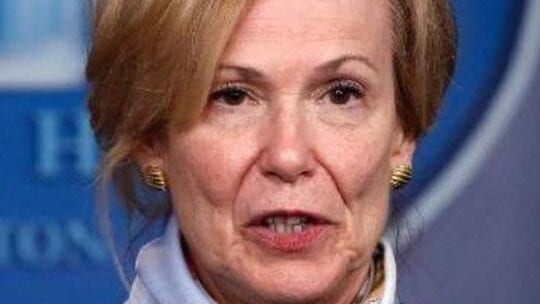 There are some people, celebrities mostly, who can predict how media will cover their death. Though he wasn’t the type who’d engage in such an exercise, baseball great Henry Aaron, who passed Jan. 22, likely expected footage of his record-setting home run would reside in his obituary.

Dr. Deborah Birx, who retired last week as response coordinator of the White House Coronavirus Task, might want to avoid the topic. It’s possible news outlets will use this clip of her cringing when former president Trump, during a televised briefing, speculated on the effectiveness of bright lights and disinfectant to battle the novel coronavirus.

Yesterday (Jan. 24), the doctor was a guest on CBS’s “Face the Nation.” During the show she mentioned that the president presented data, charts and graphs during coronavirus briefings that someone else—not she—created. Birx left the impression she didn’t sign off on the data or approve it. In short, Birx described an organized practice of disinformation. In addition, Birx claimed she was the sole staffer working full-time on in the Trump White House.

Twitter exploded. Some salute Birx, saying she did her best in difficult circumstances. She remained at her post despite seeing science downgraded and, perhaps worse, manipulated for political purposes.

I may get some heat for this, and if it's too vicious or too brutal I will block people or leave this platform. Consider yourselves warned. I lost a good Twitter friend because I heard Dr. Birx's interview this morning and suggested she did the best she could in a bad situation.

If you think you're up to date on the news because you've watched a 3m clip on twitter...

Anyone judging today to listen to Dr Birx's entire interview. 30m portion below

I hope this is one of many lessons from 2020https://t.co/s8aoOSZPnC

The interesting tweets (below) contrast Dr. Birx and Dr. Fauci and look at resistance from a gender viewpoint, respectively.

This. OTOH, I wonder abt gender dynamics that shaped Dr. Birx vs Dr. Fauci. Men who push back have integrity; women who push back are troublemakers. I’m not sure I can parse what’s collaboration & what’s “this is how I’ve always had to handle problematic men.”

Many tweets, though, blast Birx for failing to decry the disinformation campaign when she had the spotlight. They also smack her for waiting until now to criticize the White House’s pandemic response. Too little, too late is a theme of many of Sunday's tweets.

Plenty of tweeters also whack Birx for being two-faced. They point to her praise of the previous president. Many hop on this quote, from late March 2020, about the president: “He’s been so attentive to the scientific literature and the details and the data. I think his ability to analyze and integrate data that comes out of his long history in business has really been a real benefit during these discussions about medical issues.”

Others hit CBS for giving Birx an opportunity to repair her reputation.

While Dr. Birx goes on her redemption tour, just a reminder that this is who she was while Trump was letting the virus kill hundreds of thousands of Americans. pic.twitter.com/05DPrBBJ4K

All this led to an idea: If you were Dr. Birx's PR pro, how would advise her? Should she have done the CBS interview at this time? And, now that she has, and you’ve seen the reaction, from social media, at least, what would you advise? PRNEWS asked followers yesterday on Twitter.

Dr. Birx got a lot of good advice, and for a lot less than the cost of a high-end Hermès scarf. Speaking of fees, one tweeter mixes humor with solid crisis response advice. “First, I’d charge her $1,000 per hour for this Herculean task,” Joseph Ramirez (@joeramirezmiami) tweets. “Seriously, though, I’d advise her to apologize and come clean.”

Mark Drury tweeted a sensible PR approach, beginning with goal setting. “What’s her goal? Reputation rehab?” A main problem with a rehab push, Drury and others reason, is that she’s failed to answer a central question: “Why didn’t you resign?” In addition, she’s avoided owing her mistakes.

That is the crux of Kelly David’s (@kldavid) tweet. “She’s been largely silent on her own personal missteps. This [interview with CBS] doesn’t do anything to regain or preserve credibility,” tweets the director of marketing and business development.

Several PR pros tweeted that a TV interview was a bad first step. For example, Drury tweeted a better approach is “writing a book, op-ed columns, participating in public forums and panels.” He weighed in on the timing question too: “Let some time elapse, and then do sit-down TV and major publication interviews.”

Ngoc Thach (@ImNgocThach) advised “a short” documentary “at most.” The production, she tweeted, would help “humanize her mistakes” and put them in context. She also advises Dr. Birx to look inside herself and decide whether or not she wants to open up about her role on the Task Force.

On Thach’s point of authenticity and transparency, Matt Bergman (@mdbergman36) added, “If she’s going to speak now, it should be once and only if she can be sincere in saying, ‘Yes, I wanted to protect my career. I was selfish and scared and (what I did or did not do) might have cost lives.’”

An Op-Ed is Best

To Drury’s point above, let’s assume Dr. Birx’s goal is repairing her reputation. An op-ed is her next step, PR pro Christina Pandapas (@cpandapas) tweeted. “We all know if she had been openly critical” of the president “she would have been fired,” she said.

Pandapas added, “Trying to do what good she could in impossible circumstances is the message and brutal honesty now that she can.” Critics will hack at Birx “no matter what,” but an op-ed “gives her opportunity to really explain what was going on behind the scenes, even say what she wishes she’d done differently.” In addition, it can give her “a lot of inches for taking some control of the conversation.”

Crisis communicators know the importance of assessing a situation before responding. When the issue isn’t judged a crisis, the response usually is silence. That was the recommendation of several PR pros, including Mike Paul (@reputationdr), “Retire quietly…your only hope is future better deeds vs. spin of past inaction…” he tweeted.

JBLHComms and Hinda Mitchell (@hindamitchell), founder of Inspire PR Group, wonder if Birx’s knowledge of altered data presentations puts her in legal danger. “She might be culpable in criminal activity, which seems unwise to share via the media. #notalawyer” Mitchell tweeted.

PR freelancer Rachel Evans (@rachel_evans22) dissents on Birx remaining silent. “I think it’s important she…show(s) where she stands as she is tied so closely to the mishandling of the pandemic….” The only chance of salvaging her reputation is “through her actions moving forward.”

In his tweet thread, Bergman drafts a statement for Birx that tracks with Evans’s and Paul’s ‘take action’ advice. “‘ I seek neither forgiveness nor sympathy. I will answer any and all questions from lawmakers, members of (current) admin, etc. But I will not distract from the battle against the pandemic by seeking public attention. I will serve in any capacity, but will accept no compensation.’”