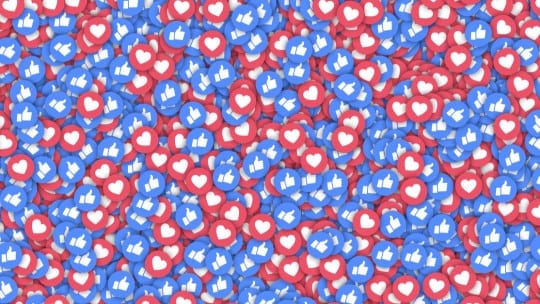 In the landscape of HBO's "Westworld," the question of "what is real?" constantly drives the story forward. "There's a deeper level to this game," the main antagonist says to another character early in the first season. In the context of the show, he's talking about the true intentions behind the marketing, and the data being collected from the park's escapist fantasy. But in the context of big social media platforms like Facebook, which continues to prioritize its own paid social tools over organic content, that same sentiment also rings true.

This is what led Kelly Stone, global social media director at CompTIA, to call her session on Facebook Analytics "The Deeper Game" at last week's PR News Facebook Bootcamp for Communicators and Social Media Summit. Stone opened by explaining that, just as in "Westworld," Facebook presents us with a game that may be different from the game that actually matters. She continued to say that through listening to the data, selecting your audiences carefully, experimenting and not being afraid to fail, social communicators can figure out what actually matters for them.

Here are a few of her valuable tips for how to play the game:

Listen to the data, and keep testing until you find the target audiences you need. Advertisers lie, and social listening can amplify certain opinions and sentiments over others, but in a world when reality often seems open to interpretation, data will never do you wrong. When properly observed, Facebook's audience data can provide a testing ground, a focus group and a measurement tool all at once.

Stone reminded that each person's occupation, race, age and gender segment can be marketed to specifically. That Facebook lets social marketers test on the cheap means you can play with these segments until you find out which combination yields the strongest ROI. In the example below, Stone showed how behavior targeting made it easy for her to market to female cat-owning parents in their 30s who live within a 25-mile radius of her. Because Facebook's tools determined a clearly defined audience based on these parameters, it has provided an estimated daily reach that she could then test out before committing to the campaign.

To test new audiences, start with no more than four. Build your audience pools, create unique value propositions for each and send them all to the same pages. Once you've created that target audience, save them. Budget for $50, run the ads for seven days and look at what the data is telling you. 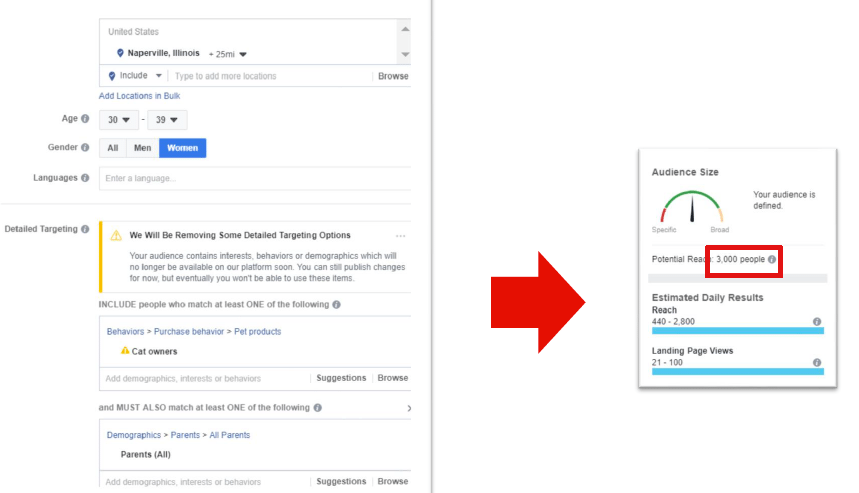 Work backwards from the desired information. This tool seems all well and good, but with so many options for segmented audience targeting, figuring out where to start is more than half the battle. Stone said that a good first question to ask is whether or not your audience is even worth creating a marketing plan to pursue. The cost-per-result on each ad may not be worth the spend for a nonprofit or NGO in the first place. Similarly, those ad dollars might be better spent reassessing and beefing up an existing campaign that could be doing better. Either way, identifying that need early on, and then working from there, is crucial to any successful campaign.

Use a traffic gen objective to measure success. Stone emphasized the importance of building out a traffic gen objective on Facebook, but Facebook offers several which increase in price according to how deep into the sales funnel you're trying to go. Building out the model for an awareness objective, for instance, will cost a lot less than building out a conversion objective. Entering into this step once you've already done your A/B testing with different ads and different segments is the smart move.

If you look at nothing else, consider the relevancy score. Facebook assigns each ad a relevancy score from 1-10 that shows how optimized an ad is for its targeted audience and is based solely on the positive and negative feedback that the ad receives. Stone said that any ad ranked with a six or above should perform well, but scores below five require some serious tinkering. And don't underestimate the power of strong ad copy and images as you conduct your tests.